Ghana was the first of the colonies in sub-Saharan Africa to gain independence. In 1957, Kwame Nkrumah was named the first prime minister and was later named president of the republic. Africa and the rest of the world followed the creation of the new state with great expectations, and the situation in Ghana inspired nationalist movements all over the continent. Ghana's future was promising with her rich resources, especially in minerals, gemstones, and timber. In addition, Ghana was the leading cocoa exporter in the world and produced one tenth of the world's gold. 25% of the population was literate then(which was high compared to other colonies at the time) and many were educated.
Nkrumah was initially popular, but faced the huge problem of uniting a country of people who for hundreds of years actively competed with, fought with, and even enslaved one another. It did not take long for the Nkrumah regime to begin repressing and imprisoning dissenters. Through the '60's the economic situation to worsened with deepening debt and inflation, and in 1964 a desperate Nkrumah suspended the consititution over the protests of the Western world and turned to the Soviet Union for support. However, the economy was out of control and the people got poorer.

The First Coup/Junta 1966-1969
On February 24th, 1966, a bloodless military coup ended the rule of Nkrumah and his government. Nkrumah was exiled to Guinea. In the following days and weeks all Nkrumah statues in Accra were taken down by the crowds. (Nkrumah died in exile in 1972.) The new military government called itself the National Liberation Council (NLC). All connections to the Soviet Union were severed and technicians from USSR and China were expelled. The west saw this as a new direction in Ghanaian politics and economics. 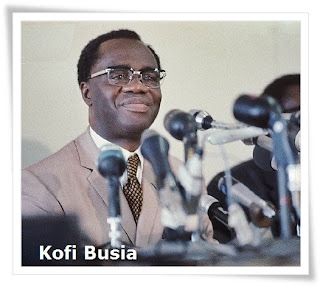 The Second Republic 1969-1972
In 1969, Multi-party elections were held and a new civilian government was formed by Dr. Kofi Busia and the Progress Party. High prices on the cocoa market gave Busia a good start, but in 1971 the prices dropped again and the economic situation in Ghana worsened. The government devaluates the Cedi-- the Ghanaian dollar-- leading to increased prices and general unrest in the population. 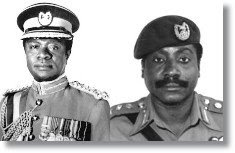 within the military once again forced a coup in January 1972. The National Redemption Council placed Colonel Ignatius Acheampong as head of the state. But Acheampong lacked experience and economic-political visions. The result was a growth of corruption in all levels of government and society. By 1978, with the economy close to collapse, Acheampong was forced to resign as general William Akuffo was placed as head of the "Supreme Military Council II". Akoffo promised to hold elections later in 1979.(Acheampong is on the left in the picture, Akuffo on the right)
Third Coup: May 15, 1979
A young Flight Lieutenant named Jerry John Rawlings headed an uprising within the army. The coup attempt was unsuccessful as Rawlings was arrested, but soon freed by his supporters.

The Fourth Coup: June 4, 1979
A few days before the planned election Rawlings led a new military coup. The Armed Forces Revolutionary Council (AFRC) took power, but promised to hold democratic elections later the same month. The stated aim of the coup was to ensure free elections and put an end to the corruption and economic chaos, and to prevent the SMC generals from retiring to a life in luxury after having run down the country. In the elections, Dr. Hilla Limann and his People's National Party won, but it was a close call: PNP got 71 of the 140 seats in parliament. Rawlings supported the AFRC in its determination to end corruption and restore order and justice before returning Ghana to democracy. The former leaders from the SMC government were tried and executed together with the three former chief of states: Acheampong, Akuffo and Afrifa. Several hundred government officials and businessmen were sent to prison. 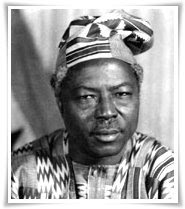 The Third Republic 1979-1981
Four months after the elections, the AFRC turned over power to Hilla Limann (right), the elected president. Rawlings and his soldiers returned to the army. The new government was not successful and widespread corruption continued. It was not able to solve the economic stagnation of Ghana. Jerry Rawlings gained more and more popularity as he continued to demand an end to corruption. But Limann did not learn much from his predecessors, and his reign is doomed.
The Fifth Coup
December 31, 1981: Jerry Rawlings once again took over through a military coup. The Provisional National Defence Council (PNDC) established Rawlings as chairman. The parliament is dissolved and all politcal opposition is strictly 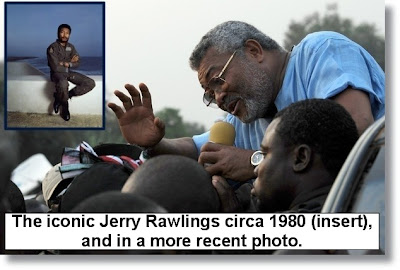 forbidden. After a decade of maintaining a tight hold on power, fending off take-over attempts, assassination attempts, Rawlings sees the economy of Ghana improving significantly. Ghana had the highest growth rate in Africa. In 1990, Rawlings formed the National Commission for Democracy to work out plans for the political future of Ghana. In 1992, A new democratic constitution was passed. Political prisoners are freed and parties are allowed. Free press and human rights organizations emerges in Ghana.
The Fourth Republic 1992 to Now
Multi-party elections are held in Ghana, and Rawlings won the presidency outright with nearly 60% of the votes. Independent observers declared the elections free and fair. During the 90's the political climate between government and opposition slowly improved. Economic growth continued in Ghana, which was praised by the IMF. Rawlings was re-elected in 1996. NDC remained the biggest party in parliament, but John Kufuor's New Patriotic Party also enjoyed strong representation. The opposition and all observers approved these elections as well. The West continued to be supportive and optimistic about the situation in Ghana, even though economic progress was slowing. 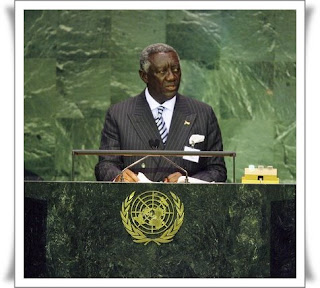 Jerry Rawlings' presidency ended in 2000 as he bowed to constitutionally mandated term limits. Vice president John Atta Mills was a presidential candidate, but John Kufour (left) from NPP who took the victory and became the new president. He initiated a truth and reconciliation commission to investigate human right abuses during the many years of military rule.
Ghana celebrated 50 years of independence as the first sub-saharan African nation in March 2007.

2008 Elections
After having lost Ghana's two previous elections to outgoing President John Kufuor, opposition candidate John Atta Mills won in a second round of the presidential election. Atta Mills was victorious over his rival, Nana Akufo-Addo from the ruling NPP party. The smooth trasition of power was praised by international observers. 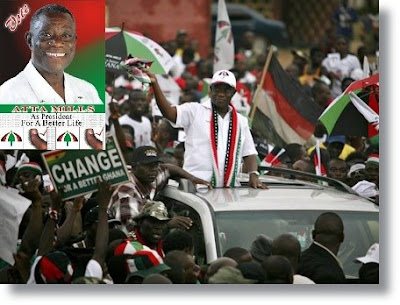 Posted by The Reeds in the Wind at 9:35 AM No comments: