This week I leave Kenya for Nigeria, where we will give a conference in Lagos on "Positioning the Nigerian Church for Global Millennium Realities," and then teach at the ECWA Seminary in Kaduna on Integrity and Finance.

But today I want to write about the economics of hope.  This is something my former colleague, Jeff Bloem, introduced to me, and it became more evident on our trip to Guatemala.  So I've been thinking and wondering about it of late.  When I wrote a few of weeks ago about our trip to Guatemala, I referred to the fact that there are many similarities between the poverty there and what I've seen in Africa, but also many differences.  One of the more startling differences seemed to be a lack of entrepreneurship.  In almost any African village you visit, you will see multiple small scale, hand-to-mouth businesses.  Almost every African you meet will have one, if not two or three, small scale businesses running, often in addition to a full-time job. Yet the villages that we walked into in Guatemala seemed to have almost none.  [Again, I only went to a few villages, the tours were quick, and so I may be generalizing too much.]  Assuming these differences are accurate - and we did consult with a number of Guatemalans who substantiated the observation - what is the reason for the difference?

We know that God made all people in His image, with His creativity, so it's not that people in Guatemala are simply less entrepreneurial.  All people find happiness when contributing to something greater than themselves, so it can't be that Guatemalans are not-hard working.  Guatemala is a rich country in terms of natural resources, so it's not that people don't have resources with which to work.  A very wide gap between the rich and poor exists in many nations, so that can't be the reason.  Hardships (civil war, hurricanes, earthquakes) have been plenty across Africa as well as Guatemala, so that can't be it.

Guatemala had a thirty-six year civil war.  That's a very long time of insecurity.  Unlike Africa, most rural people do not own land on which they can grow food.  They are more likely to be day laborers of large scale farms. Throw into that mix a very long history of conquerors, and natural disasters, and it seems to be a recipe for what we used to call a "lack of hope in the heart," which psychologists today call self-efficacy.

Jeff quotes a psychologist who said this:

A psychologist walked around a room while teaching stress management to an audience. As she raised a glass of water, everyone expected they’d be asked the “half empty or half full” question. Instead, with a smile on her face, she inquired: “How heavy is this glass of water?”

She continued, “The stresses and worries in life are like that glass of water. Think about them for a while and nothing happens. Think about them a bit longer and they begin to hurt. And if you think about them all day long, you will feel paralyzed – incapable of doing anything.”
Remember to put the glass down.

Imagine holding that glass for 36 years and apply that to a person living in poverty in Guatemala.  [Then think of North America and those locked out of the social system whether they are Native Americans, African-Americans, Latinos, or Anglo-Americans through poverty that is not easily escaped.]  What hope do they see of being able to effect change?  What aspirations might they hold to believe that things can change with hard work and perseverance?

Often times we approach the challenge of poverty with external solutions - such as micro-credit, education, and other well-intended programs but we don't address the internal constraints that a lack of hope imbues. We forget that when we don't understand who we are in Christ - made ON PURPOSE and FOR A PURPOSE, we lack the hope to make positive changes.  A "hope intervention" was done in Mexico by economists who focused on micro-finance loans AND a Biblically-based curriculum that looked at bolstering aspirations, helping people recognize their own abilities, and their ability to see a path out of poverty.  The results of that study showed good results.

It's a BOTH/AND not an EITHER/OR.  Too many churches focus only on who we are in Christ without the practical tools of how to apply it.  Too many NGOs/non-profits focus on external solutions to poverty without addressing a lack of hope in the heart.

Most of us reading this have no idea what it is like to be without hope.  Not real, deep, on-going, all-encompassing despair for yourself and your children.  Most of us have networks and relationships that we can navigate - with a worse case scenario of having to swallow our pride to use those networks. 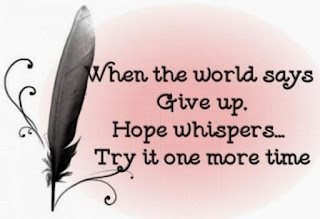 But imagine holding a glass half full of water for thirty-six years.

Let's be the Church that says, with Christ and some practical tools, you can try it one more time.
Please pray for the work of Discipling Marketplace Leaders as we try to reinforce the message that we all have been created ON PURPOSE, FOR A PURPOSE, and supply some practical tools for how to multiple those talents.
Posted by The Reeds in the Wind at 11:05 PM No comments: