Weather:  Harmattan Winds are still here - dust continues to fill the air, causing people to cough, have breathing issues, sinus issues, eye problems, electronic equipment break downs, etc.  Temperatures are in the mid80s, with humidity at 78% and dewpoint at 68%.  Visibility is at 0.6 miles, if that gives you a sense of how heavy the dust cover is - the sky is actually clear (most places have a visibility of 10 miles under a clear sky).  It looks like it is cloudy but it is just dust.  Rain would be great to clean some things off and remove some of the dust from the air, but we haven't seen rain for weeks. 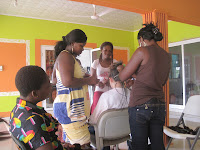 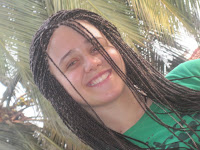 Reed Family:  It's been almost a month since I wrote last - the holidays were a little more difficult for me than expected, so I took some time off from writing the blog.  The last time I wrote, Hannah had just arrived in Ghana and it was great to have her home.  She caught up on sleep, spent some time with her friends here, went on a youth retreat with the church, and hung out with Noah and I.  On her last day here, we decided to have her hair braided, West African style, which she hadn't done in all of our time here.  So after six painful hours with six young women at work, she got on a plane and headed home.

Noah turned 17 today (January 16) - so very hard to believe - and has pretty much reached the six foot mark - also hard to believe.  He continues to do well in school, is busy applying for scholarships for Calvin College, and had his very first job interview today for a summer job.   One of the applications for scholarships wanted him to identify one goal that would define him, which caused for some great conversations and further identification of his gifts, passions, and talents.  At this point, he is looking at foreign service work, with a potential career in the United Nations or for the US government.  He hopes to study political science, international relations, and other related fields.  I think that is a great fit for him and am pleased to think that his experience in West Africa over the past seven years will have impacted his future in a positive way. 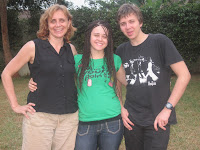 My work continues to go well, but not without its struggles.  Below is a brief report on each of our partnerships:


Nigeria:  As you have probably seen on the news, there have been two issues plaguing Nigeria - the Boko Haram, a Muslim group who wants Shiria law in place, has been attaching various churches and Christians.  A state of emergency has been put in place for three different states, including the Plateau State where our partnership is located.  The Christian Coalition in Nigeria has declared that if the government is not able to protect them, they will protect themselves.  Secondly, on January 1st, the government removed a gas subsidy, causing the price of gas to double.  Nigerians view this as the only benefit that the average person receives from being such an oil rich land, and therefore are angry it was taken away, despite promises that the money will be funneled into social programs.  There have been country-wide strikes for the past five days, causing airports, roads, banks, schools, etc, to be shut down.  Our partners report that the informal sector continues to function and they feel relatively free to move around, but we do ask for prayers for peace as the government negotiates with the union leaders. 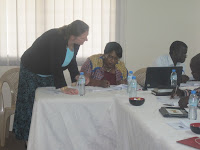 Ghana: In the basic business principle class that we offer our SME (small and medium entrepreneurs) members, we teach very basic book-keeping for about six of the thirty-six hour class.  It's a good start with simple skills but for businesses that really want to grow, it doesn't go deep enough.  This past week, Dr. Lynn White from Trinity Christian College in Chicago, came to teach thirty of our high impact entrepreneurs accounting.  Twenty-five hours of double entry journaling and ledgers, adjusting entries, closing entries, trial balances, and post-closing trial balances.  It was great!!  Not only did our SME members learn a lot, but the Hopeline staff also benefited from this. 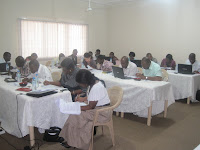 We looked specifically for our members who could handle higher level math and had access to a laptop.  Everyone was given excel documents as well as paper copies of the material and they had a great time learning this new language together and learning how the computer can do much of the work for them.  Each day ended with some level of frustration for the business owners but it was amazing how much people understood by the end of the week.  I believe this will have a great impact on their businesses.  Our thanks to Dr. White and Trinity College!

Côte d'Ivoire:  Dea Lieu, the director of our partnership in Danané, came to the Partners Worldwide Conference in Michigan, in October 2010.  During his visit he went for a routine visit to the doctor, only to discover that his kidneys were failing.  He was told he would have six months to live without dialysis and needed a kidney transplant.  His Global Business Affiliate (GBA - every Partners Worldwide group has one), based in Sioux Center, Iowa, sprang into action.  As an Ivorian, and not an American, he could not go on the regular kidney transplant list for a cadaver, but would have to find a live donor.  Funds had to be secured for an operation that would cost upwards of $500,000 including anti-rejection medications for the rest of his life at around $1000/month.  Showing a persistence and diligence that was nothing short of miraculous, this GBA was able to find insurance to cover most of the cost, raise over $100,000 for the various tests, medications, as well as anti-rejection medications for the next five years, as well as find numerous people who were willing to be tested to be a match for a kidney donation.  But then two more miracles happened:  the third person tested was Amy VanderBerg, one of the members out of a group of six in the GBA, and she was a match.  Normally, they say, a match is found around the 30th person, not the 3rd.  Plus, to have a match come from within this group illustrates the depth of partnership and commitment of this GBA to the work in Côte d'Ivoire and to Dea.  Amy is a wife and mother of two small children and wants this gift to be seen as one from God, not from her, so praise God!!  The surgery took place last week and went very well.  Both Amy and Dea are back home - Dea's kidney is working well and fifteen months after arriving in the US, he is beginning to see the light at the end of the tunnel for when he can return home to his wife and children.  The second miracle comes from Côte d'Ivoire:  Dea has been praying for his parents to come to Christ for some time.  About two years ago, his father became a Christian.  Last week, his mother gave her life to Christ, stating that if a woman in the United States was willing to lay down her life for her son because of her faith, then she too wanted to follow that same God.  It may be some time yet before Dea is able to return to his work, but we are hoping it will be before the end of 2012.

Liberia:  Today is the inauguration ceremony for President Ellen Johnson Sirleaf.  Thirty heads of state will be there to celebrate this day with the country.  The highest priority for 2012 is the high number of unemployed and uneducated youth, with an emphasis on vocational and technical training. This vibrant, strong 72 year old woman will serve this country for another six years, Lord willing, and bring it further down the road of peace and development.  The work with LEAD continues to go well.  I am planning to return to Liberia in February to do an intensive week of training with the staff, reviewing policies and procedures, the business curriculum, as well as spending time reviewing Business as a Mission and why we do what we do.
Posted by The Reeds in the Wind at 1:20 AM 2 comments: