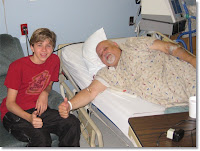 Father and Son Day at the Local Sanatorium
.
.
I think I left off with "...but I still feel very shaky." Turns out, I was only halfway through my bout with malaria and its complications. Last Sunday, the 10th, I began my medicine and by Monday I had lost my fever and body aches, but still did not feel over it. Tuesday came without much improvement, and by Wednesday, when I had to cancel a much anticipated trip to a Bread for the World meeting in Washington DC, my fever had returned, along with an alarming inability to catch my breath. Both my primary care doc and the CRWM missionary doc recommended that I find my way forthwith to the Butterworth Hospital Emergency Room. Got there around 7:00pm and was admitted a few hours later. My malaria, treated late, found enough time to leave a parting gift: pneumonia and edema. They hooked me up to several IVs, shoved an oxygen tube in my snout, and I settled in for another week of crapola.
On Friday the 15th, I had a visitor. Our fourteen year old son, Noah stopped by to say hi, although cheering up Dad was not his primary reason for being at the hospital. He was there to join me as a patient. He was scheduled for surgery in a couple hours.
I mentioned a few weeks back that he had speech difficulties stemming from a condition known as velopharyngeal insufficiency, which involves the lack of the soft palate to close off the throat properly during speech. 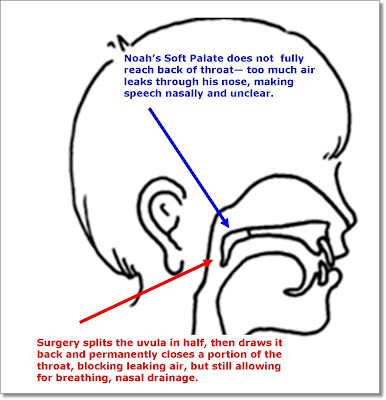 The two hour surgery on Friday was a work of art and very successful. I was feeling much better, so I was allowed to stroll over to the recovery room and join Renita for a reunion as Noah returned to groggy consciousness. We left the hospital together Saturday noon. He's healing rapidly and though sore and on liquids, felt good enough to attend the school dance on Saturday and is back to school today.
.
As for me, I feel great compared to how I felt. In about three days, I've lost 20 pounds of fluid from my body, my aches and pains are back to a normal 54 year old level, I'm treating the now mild pneumonia with antibiotics, and mostly I just feel like I have a cold and am still catching up on sleep.
.
Renita has set new levels of steadiness and strength during these two weeks. Both Noah and I in the hospital in pain, and she ran the show, took care of us, and never flagged for a minute in her other tasks. I marvel.
.
Ok, but that's enough about us for a while. Next time, if circumstances permit, I want to highlight some of the great work Renita is involved in-- in Côte d'Ivoire.
.
Below are a few more cheery hospital scenes. 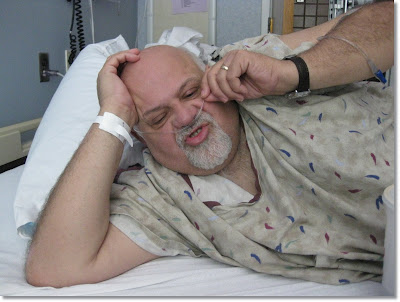 Could really do without the tube, and the oxygen dried my nose, but I needed it. 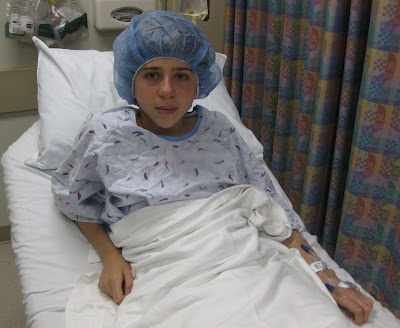 Noah, ready for his Friday date with the scalpel. 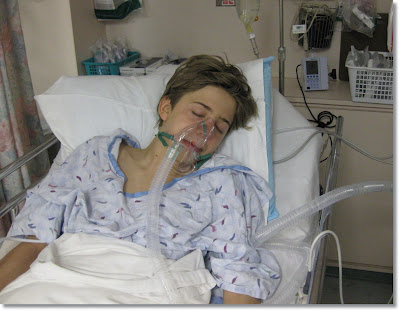 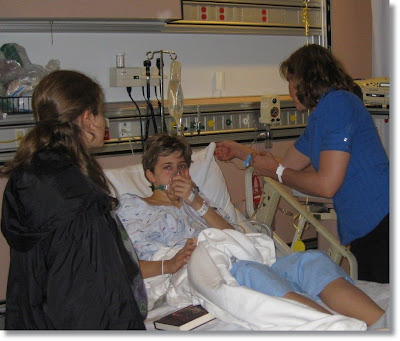 His whirlwind of a Mom adjusts something while Hannah hangs out. 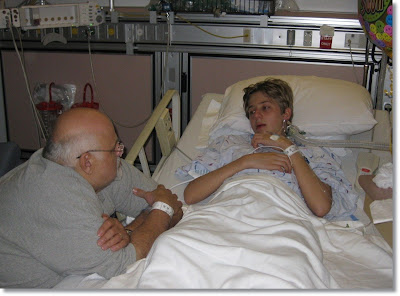