Hebrews 12:1 says, "Since we are surrounded by such a great cloud of witnesses..."  The previous chapter, Hebrews 11, takes us through a litany of people who acted by faith and were commended for it.  People like Noah, Abraham, Isaac, Jacob, Moses, and so on.  People who acted courageously, who "went about in sheepskins and goatskins, destitute, persecuted and mistreated— the world was not worthy of them. They wandered in deserts and mountains, living in caves and in holes in the ground." (Hebrews 11: 37b, 38)

Two witnesses joined that great cloud in this past week.  Two women who played a significant part in my life, both of whom lived lives of integrity and great faith.


The first was my husband Michael's mother, Hylda Thomson, who died on Saturday evening, December 17, at the age of 83, after a painful struggle with cancer.  She was only my mother-in-law for 2.5 years and I didn't have a chance to get to know her very well, but what I do know well is the testimony of who she helped form in her son. You can tell a lot about a mother from her children - not everything, of course and sometimes children go off course - but the older I get, the more I realize how important our formation and upbringing is, and how we don't move away from it very easily.

Michael is not only a very loving and caring husband, but a very loving and caring parent to his two sons.  I can only believe that his parents played a significant role in the formation of his capacity to love, serve, and give of himself.  How could I not love her for that?  Michael's parents served the Church for many years: learning French and pastoring in churches in Quebec, serving a church of mostly Haitian immigrants and learning that culture, starting a seminary in Montreal so that French speaking pastors would stay in Quebec, and serving God in whatever other way He called. 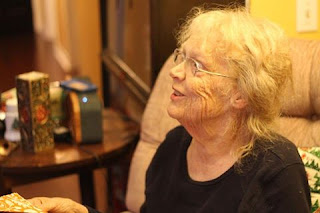 We spent about 36 hours by her bedside, and her five children, their spouses, and a good number of her sixteen grandchildren were present.  It was a time of praying and singing, scripture reading and sharing stories, crying and mourning, distress and joy.  It was a holy time and I was privileged to observe and learn more about the family that formed my husband.

I believe that she has joined this great cloud of witnesses and will now be cheering on those of us who continue to run the race set before us.


The other witness who has joined this great cloud is Jane Lambers.  Unfortunately, I didn't hear of her death until after her funeral service.  She was such an important part of my life that I feel compelled to speak of the impact she had on me since I was not privileged to join with those sharing the testimony at her funeral.  I became a deacon at Madison Square Church at the same time as Jane Lambers in 1997, at a time when the deacons were looking at how to move from relief to development, to being a church that works "with" the community rather than "to" the community.  When the non-profit Restorers was born, in combination with five churches in the Madison-Hall community, I volunteered as Jane joined me in sitting in an empty building, trying to figure out how to move from point A to point B.  She worked pretty much full-time with me for seven years, debating and discussing issues relating to poverty and racism on a daily basis during that time.  She was my coffee buddy.  She was the one who would send me to my office to write grants and make sure that I was not distracted.  She knew me so very well and those were such precious years for both her and myself.  I had lunch with her not too long ago and while her memory was slipping, she was able to speak with such pleasure about our time together at Restorers.

Jane and John Lambers were two people who not only spoke freely about their faith but were determined to live it out in a real and powerful way.  Jane struggled and wrestled for all the years I knew her with how to be even more real, and wondering how the church could do better at addressing issues that were so real to her heart:  justice, poverty, and racism.  She and John lived in community for many years, sharing all resources, and continued to live with the values of community for all of their years.

I feel so privileged to have had the joy of working alongside Jane for so many years.  I was just thinking last week, as I was writing a document that was a tough write, that I needed Jane to "send me to my office" and make me write without distraction.

I pray that both of these witnesses are celebrating among so many other witnesses who have graduated from this life to the next.  They continue to spur on so many through their testimony.


Therefore, since we are surrounded by such a great cloud of witnesses, let us throw off everything that hinders and the sin that so easily entangles. And let us run with perseverance the race marked out for us, 2 fixing our eyes on Jesus, the pioneer and perfecter of faith. For the joy set before him he endured the cross, scorning its shame, and sat down at the right hand of the throne of God. 3 Consider him who endured such opposition from sinners, so that you will not grow weary and lose heart.

Posted by The Reeds in the Wind at 8:38 AM No comments: