And now a word from Hannah...

When you send your children off to college, you expect their mindset and worldview to be challenged.  It's what makes college an exciting time, as they encounter new people, new thoughts, and independence.  This happened for Hannah during her first interim class at Calvin this past January, and although I wasn't expecting it to be on this topic, it's great to hear her so passionate!  And now, Hannah...

As humans, most of us would call ourselves omnivores.  Others, those who enjoy meat to an extreme level, proclaim that they are carnivores.  Others are herbivores, shying away from meat and, at times, even all animal products.  Until recently, I was one of the majority and considered myself an omnivore.  Recently, however, I changed from your average omnivore to an herbivore.  I became a vegetarian.

The reactions to the word “vegetarian” or “vegan” are usually reactions of distance.  Most of us do not have a good understanding of the reasons behind being vegetarian, much less a vegan.  We may respect this lifestyle for its potential difficulties or be curious as to what encouraged the change, but for the most part we do not consider this lifestyle as a calling on our own lives.  It may seem extreme, or meat is just too important nutritionally and esthetically to give up.

I was of the same mindset.  I respected vegetarians, did not really think much about veganism, and continued chewing my hamburger.  But don’t you just love those moments when a random choice ends up exploding your whole life and shattering the perspectives you have contentedly held for good portions of your life?  I do not hold any particular fondness for those moments, but God sure does.  It is one of the many reasons that I love Him.  Earth-shattering is not fun to experience, but after the dust settles the view is much better than it was before.

My random choice that resulted in this explosion was when I decided to take a class in January with some friends that was entitled “Peaceable Kingdom” and included learning about our relations with animals and working to restore those relations.  It sounded cool.  I have always loved learning about things in nature and have been something of an environmentalist since about sixth grade.  The real draw, however, was taking a course with some good friends.  These good friends knew a little more about the class and decided to try vegetarianism for the month of January just for fun.  I am rarely one to shy away from a challenge, so I decided to do it with them to prove to myself that I could.  I entered the class and, KA BLAM, my world was rocked to its core.

At first, I was going to attempt to squeeze everything I had learned over the class into one post, but realized as I got to the third page and still had a lot more to go that I would need more than just one blog.  So there will be a subsequent blog.  I hope no one views these blogs as an attempt to manipulate or spread “vegetarian propaganda.”  I am simply very passionate and excited about what I learned and would love to share it.  Feel free to email me with any questions or comments (har5@students.calvin.edu); I love talking about this now. :-)

This entry is about the theological perspective of vegetarianism.  Upon entering the class, my understanding was that God had given us animals to use for food.  I knew the story of Genesis and had heard for most of my life that animals were created for humans both to care for and to use.  When, in a high school Bible class, I learned that in the beginning humans were vegetarian, I was shocked.  After thinking about it, I realized that it made sense, but the concept was so foreign to me.  It wasn’t until this class that I was told that it was only after the flood that God condoned meat-eating.  Noah came hundreds of years after the Fall and therefore eating meat was not simply allowed by God as a result of the Fall.  He allowed it hundreds of years later.  Why?  My professor taught us and gave us readings of the opinion that by this time, man had been eating meat with reckless abandon, killing and eating without thought.  God had a problem with this way of life, but understood that we humans are bent on sinning.  So instead of banning meat, He put parameters on meat-eating so we could be healthy and thoughtful about meat consumption.  It was a concession - not something God wanted to happen.

The concept of God’s continuing desire for us to refrain from meat consumption, even after the Fall, snapped me to attention.  I figured eating meat would have been no problem.  We were out of the garden and needed the nutrition provided by animals.  Isn’t that what animals are for?  It seems from this passage, that that conclusion is the wrong one to draw.  Animals were still important and valued by God as more than fodder for humans, even after the fall.

As I have grown older, I have learned that when God wants or decrees something there is good reason for it.  Though the Israelites did not understand it at the time, there were sanitation reasons as to why the latrines had to be a certain number of feet away.  There were health reasons for preparing food in a certain way.  And I believe there are good reasons for His desire for us not to eat meat.

Next time a blog of mine goes up, it will be about the incredible abilities that animals have.  Too often I think we view animals as tools for our use and miss the incredible abilities that all animals have, from a pig to a chimp, from a chicken to an eagle.  Viewing animals in this light really opened my eyes to what exactly I was eating when I bit into a steak.
Posted by The Reeds in the Wind at 1:08 AM 1 comment:

Weather:  After a couple of weeks of some dust relief, the dust is back in full force, with a visibility of 0.3 miles.  Because pictures just can't capture it, let me try to explain this better:  I live close to the airport.  Normally, when I sit in my office, I can see the planes going by and can tell which carrier it is.  When I have guests arriving, I wait to see their plane go by my house before I get in the car and drive to the airport (just to reinforce how close I am to the airport and how low the planes are).  Right now, I can't even see the planes when they pass - I can only hear them.  They have been closing airports in Ghana because of the dust.  I have shake the dust from the top sheet of my bed at night...there are footprints in my house at night, after sweeping in the morning...amazing.  Will probably last until March. 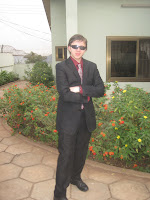 Noah is currently involved with the Model United Nations, and this year is representing Turkey.  He is on the committees dealing with the Millennium Development Goals as they relate to gender equality (Goal #1 of 8 for MDG), full and productive employment of disabled persons (Goal #3), and transnational organized crime.  He has really been enjoying it and was given the "Most Diplomatic Award" - so maybe this is in his future.  And surprisingly, he has enjoyed wearing suits!  (For those of you who know Noah, this is quite the change from ever-present black t-shirts, black jeans look!  Of course, he still had to do a "Men-in-Black" look with the shades, but I think  he cleans up very well!)  I love how this program encourages young people to think at a global level, research policies and write resolutions, learn the art of debate in an orderly fashion, and dress for success.

As for my work, we recently had two guests here from Alsum Farms and Produce in Wisconsin: Larry Alsum (Owner and CEO) and Derrick Smit (Human Resources/Staff trainer).  [If you would like to know more about this business, link to their brief video on YouTube.  I'm always amazed at the technology in the US and this business is another great example!]  While they were here, they studied the value chain, from "field to fork", visiting with farmers, food processors/packers, informal markets, and formal markets.  They then gave a presentation to about fifty farmers and Ministry of Agriculture officials as to the challenges and opportunities of food packaging, production, and distribution.  It was a great time of networking and idea sharing.  Ghanaian farmers are eager and ready to take their farms to the next level, and we will be exploring opportunities to develop a community supported agriculture approach in the next few months.  After spending a week in Ghana, Larry and Derrick spent a week with LEAD in Liberia, meeting with farmers there and spending time on the research farm. 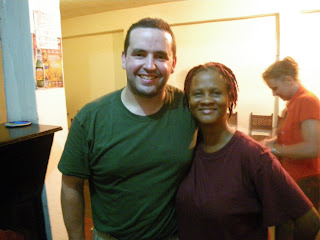 On Wednesday, I will be heading to Liberia for about ten days to do an intensive training with the LEAD staff.  James Nowell, Chairman of the North American partner for LEAD in Grand Rapids, will be joining me from Kalamazoo, MI.  He will be working with me on some office audits, leading several sessions on Business as a Mission with LEAD staff, networking with the LEAD Liberia board members, and visiting the research farm.  James was last in Liberia in 2010 - the picture to the right is James and Betty Shannon, Board member for LEAD Liberia.

I will be returning to Ghana on February 25.  On the 26th, guests from various countries will begin arriving for the West Africa conference with Hopeline Institute and Partners Worldwide.  We are excited about this conference - the speakers and workshops look to be great.  Pray with us that it will be a time of great networking, dialogue and growth.  More on that later!

Posted by The Reeds in the Wind at 1:09 AM No comments: