There and Back Again

Yes, I was There-- and Now I'm Here. Saturday Someplace Else. Sunday, She's There.

This will be brief, but I know two or three of you need something from us every week, so here is some news-- and why you didn't get a blog earlier this week.
.
First I was too airborne to write, then two busy to write, then not enough connectability to write. I was in Michigan.
.
I felt like a ghost whisping in Sunday night and vanishing noon Wednesday. I was attending a CRWRC conference on peacebuilding-- remind me to tell you what that means sometime. But the trip was a gauntlet. With only an hour layover in Frankfurt, Germany there and back, there was nothing to do but rush from one 8-hour flight to the next. It meant stuffing this carcass into a cramped seat for seventeen hours, twice. The conference was held at Gull Lake, quite a ways from good cell phone and internet coverage, so it was almost impossible to keep in touch with Renita. However, it was very nice to see my colleagues and fellow laborers, and to meet new ones. But it was over in a blink, and now I'm back. Just in time to travel to Togo Saturday by car with the whole family-- why, you ask?-- we'll fill you in later. We promise to take pictures, but anyway we must rush back because Renita flies out for ten days on Sunday. Where? Back to West Michigan.
.
I hope to write more about all this when my life settles down on Monday.
. 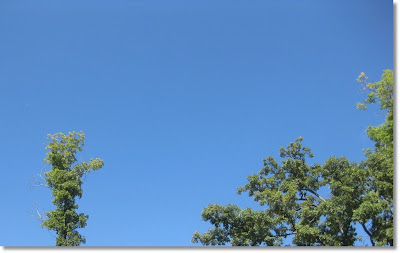 Nothing like the blue autumn skies of Michigan. My favorite color. Not "blue--" but "Michigan October Sky Blue." This from Gull Lake, just before I left. This interesting shot just in, from my window seat a few hours ago-- that's our house down there in East Legon. I have another one of my daughter's soccer team on the field. Cool!

Posted by The Reeds in the Wind at 2:33 PM No comments: