One Teaspoon of Feces per Day

(Warning: you may not want to read this over breakfast:-).

As I mentioned a couple of weeks ago, I am working with Hopeline Institute which serves the greater Accra area. In addition to business development, Hopeline also does community development and focuses specifically on heath issues in a large number of villages and communities. I was invited to attend their Health and Sanitation training on Thursday where 24 community leaders had gathered from different villages to learn about how to teach about heath within their village; I had been asked to share information about the Sawyer Water Filter, a filter that can last a lifetime and is very simple to use.

While there, I had the opportunity to hear the Community Health speaker from the government talk about hygiene and sanitation. She stated (correctly, in my opinion) that so many people want to improve the health of people in developing countries but often that ends up only looking like water, water, and more water. While she acknowledged that clean water is very important, she pointed out that when it does not go along with hygiene and sanitation 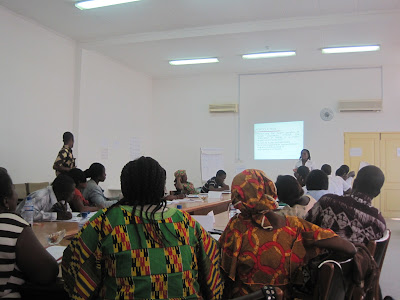 education, there may be no point. If a family has a filter, or water tablets, or a bore hole, but doesn't know how to keep the containers from getting contaminated (i.e. dipping a drinking cup into the bucket), the clean water doesn't really matter. Additionally, if a family doesn't have proper bathroom facilities, the same diseases being avoided through clean water will still present problems.

The speaker then went on to give two statements that go everyone's attention: "The average Ghanaian eats on average one teaspoon of feces every day." The second statement was, "The reason why some people don't use latrines is because they believe it is taboo to poo-poo - no, we are adults here - to shit on another person's shit. They would rather go anywhere than use a latrine." Well she certainly got my attention. Maybe that is why I've seen so many abandoned latrines. 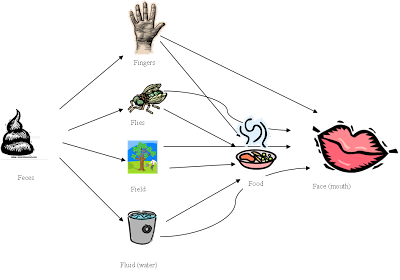 She then went on to explain how it is that feces are consumed with what she called her "F" diagram, which looks roughly like the diagram above.

The problem of course with sanitation and hygiene is that it's difficult to get excited about it or to show results. Counting wells that are drilled or filters that are given out is tangible; teaching hygiene is more nebulous. Here are some pictures of open sewage in the area. 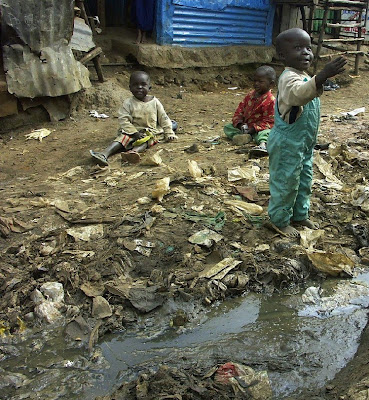 Children playing alongside dirty running water, surrounded by trash is something that happens all to often. The speaker mentioned that often rural villages are much cleaner than the urban sprawl areas where fewer people take responsibility for living conditions. 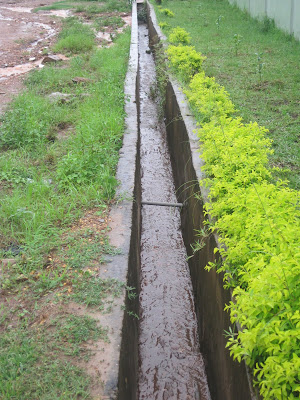 An open sewer in Accra.
Posted by The Reeds in the Wind at 3:00 AM 1 comment: