Remittances - Who Really is Funding Development?

Since I have been involved in poverty alleviation and development for the past 20 years (20th anniversary this year!), I continue to be fascinated by how development works in various contexts.  I remember when we lived in Liberia that we were told the biggest business was Western Union, the company people use to send money into the country.  That was back in 2005, just after the Liberian civil war ended.  Today, 31% of the GDP in Liberia is still made up from remittances.  "Remittance" is the term used for money that immigrants send back to their home country.  While exact numbers are not known, the World Bank Group studies the patterns of migration and development, and publishes a report on remittances.

There has been a lot of concern recently by some about immigrants and the net effect on a country (especially the US).  [Interestingly, while the number of immigrants has gone up in the past number of years, the percentage remains just above 3% of the world population for the past fifteen years.] I think this information about remittances puts immigration in a different light.

The amount of aid that went to developing countries in 2015 was 131 Billion. According to the World Bank, remittances are three times the amount of aid and can make up to 10% of a nation's GDP. 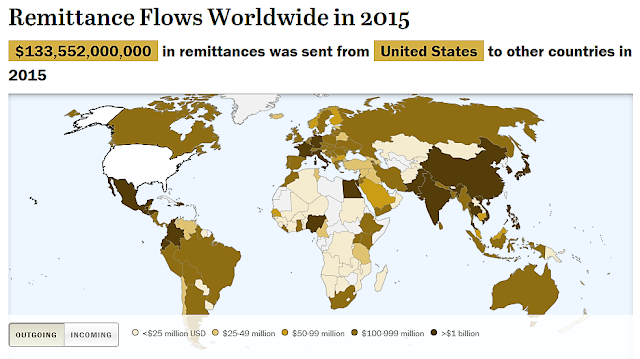 So who is supporting development work?  Immigrants or Aid Donors? What do these statistics tell us?

It certainly seems that immigrants are the main people supporting development work.  And of course they are supporting people that they love and trust, they understand the culture, they aren't tripped up by paternalism or condescension, things that continue to plague the aid community.

Researchers believe that these remittances are a good thing.  They are a lifeline for many families, contributing to basic needs, education, health, and local businesses.  They however do go for personal needs and not for a country's infrastructure.  Taxes are not paid on this money so the country roads, education, health systems, etc, are not supported by these funds.

Some countries complain about the amount of money that is sent out of their country, however migrants on average only send 10-15% of earnings, so they still are making a larger contribution on the local economy.  They also often take the jobs that many others do not want, make a valuable contribution in terms of their work, as well as pay taxes.  If there is anything I have seen from living and working in developing countries is that many people take 1 Timothy 5:8 very seriously:  But those who won’t care for their relatives, especially those in their own household, have denied the true faith.  These immigrants, who often work low paying jobs in high-income countries, are sacrificing much of the little that they make, to send money back home, to care for their families. 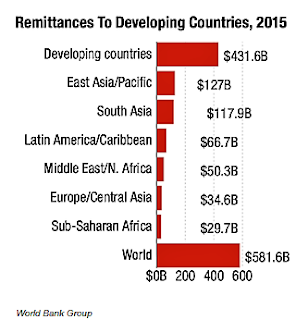 So by and large, it seems that many more people in the world would be suffering without the remittances being sent by the diaspora to their home countries.  As Christians, we believe that it is important to take care of our families and we also believe that we are called upon to help the poor.  Remittances seems to address both of these challenges with solutions that may surpass the issues of aid that we have been seeing in the past number of years.
Posted by The Reeds in the Wind at 10:08 PM No comments: