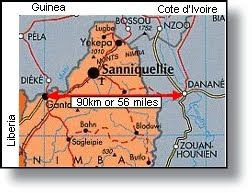 3 Hours of Bad on a Bike

.
.
.
.
.
If Renita's journey from Ganta Liberia to Danane' in Cote d 'Ivoire was a tiring ordeal, her return trip to Ganta was truly exhausting. Leaving Danane' from long farewell ceremonies, she arrived

at the border after a jostling ride only to find there were no taxis at the border. She was in the middle of West African nowhere, it was getting dark, and she was lugging a large suitcase. The only vehicles around were small motorbikes. So for the next three hours, over some of the worst roads we are willing to travel, holding her suitcase with one arm and the bike with the other, Renita traveled the 40 or so remaining miles to Ganta. In the total darkness and choking dust of the Liberian wilderness, stopping and starting through bone rattling holes and bumps, she and her driver bounced on. I'm sure no one needed to tell her how vulnerable she was. In an area where borders don't mean a lot and Ivoirian rebels and Liberian rogues watch the roads, a little motorbike is an obvious target. But she made it. She arrived in Ganta around 9:00pm, filthy, probably a bit angry, and too exhausted to be relieved.
.
When writing about our work, I usually don't focus on us. The work and our activities are not about us. We are not in West Africa to have adventures, though an adventure it has been. When I tell our story, or i 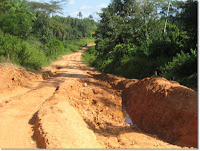 n this case Renita's story of her battering trip, I'm really hoping the reader gets that this is really just everyday life in West Africa. The motorbikes and taxis are there every day, every night. For Liberians and Ivoirians living in the area, the dangerous, dusty, joint jarring travel is the norm. As proud as I am to part of a work that takes us to forgotten places, sometimes even hazardous places, I remain deeply in awe of the people that live in places like Danane', Ganta, and especially in-between. So many are profoundly resilient, flexible, adaptable, and strong. We are just traveling through, and these places kick out butts (literally). Yet our West African friends call these places home.
.
The five days of workshops in Danane' were successful, as were the many meetings that went late into the night. Renita and the board and staff of ACLCP worked hard at reaching deeper levels of understanding-- sometimes through sharply different viewpoints. When it was over, she had the sense that she had made new friends.
.
As I write, on Monday 16 November, Renita is on the road again-- first the three hour trip from Ganta to Gbanga, then the three hours from Gbanga to Monrovia, where she will spend another week. She'll be meeting with the folks from LEAD, visiting new business sites, and hopefully, getting some rest. 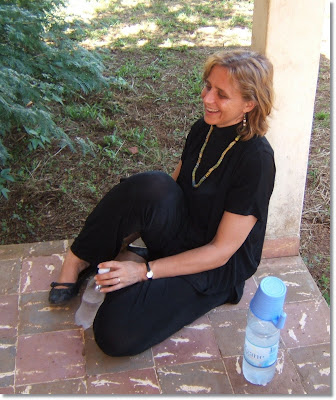 During the workshops, Renita takes a break. 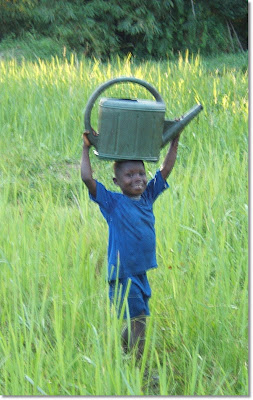 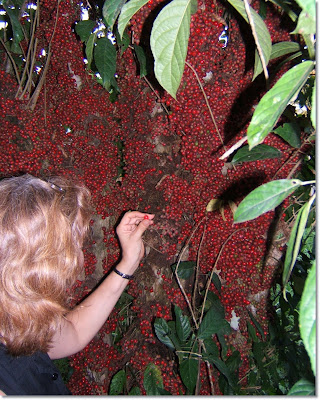 I'm unfamiliar with these small, tart, grape-like berries. Any ideas? 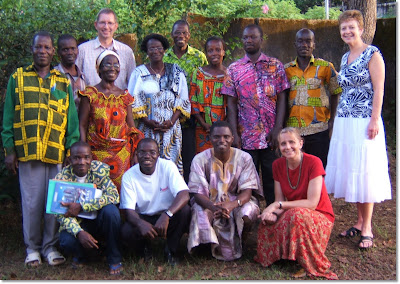 The whole team, including the Kollenhovens, a Dutch couple from Canada, and in the green in back, Dea Lieu, director of ACLCP (Roughly translated from the French: Christian Association Fighting Poverty) 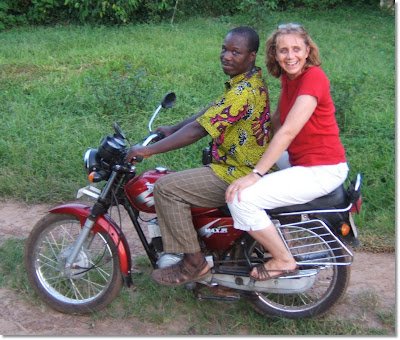 This was Renita last week enjoying a motorbike ride from one of ACLCP's board members and a pastor. After her recent nighttime trip to Ganta, she'll never look at these bikes the same way.

Accra Weather: While thunderstorms rumble just to the north, Accra remains dry and dusty. Daytime high typically in the mid 90sF, with a light 10mph SW breeze all day, then temps drop to the upper 70s to lower 80s at night. The breezes are quieter in the evening than in the wet season.