To be honest, I wasn't sure about DML starting to work in Burundi.  Burundi is a small nation (smaller than Maryland), with about 12.5 million people and a per capita income of $254/person/year.  This nation, which is fourth in terms of having the highest amount of poverty and having recently been through an extensive civil war, is not a nation that I expected to have business thrive and I worried about it having the capacity to engage in business development.

What I failed to consider was the potential of a population that is tired of poverty and war.

What I failed to consider is the readiness of the church to engage a ministry which promotes that work is a good and godly thing, making room for a theology of work and doing work as worship.

What I failed to consider is how rapid a population that is tired of poverty can pivot. 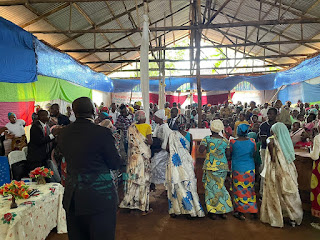 Last year, just before COVID, we made our first visit to Burundi to begin the teaching of DML.  During the past year, we received many positive reports of how the work was going, but to honest, we were skeptical that the reports were reflections of what we consider "success stories" as we weren't sure that one visit was enough for the leaders to embrace AND be able to teach this message.

But our visit to Burundi this past week put those fears to rest.  This is a nation that is ready for change.  Our DML Burundi team kept us very busy meeting group after group of pastors and businesspeople, as well as a group of 1000 youth!

My colleague, Phil Walker, arrived the day before me and was able to attend a DML commissioning service for business people at a rural church in Gitega on Sunday.  There he had his perspective adjusted when he heard testimony after testimony of lives which had been changed as people began to see their place in God's economy.  Here is what he wrote about that service:

I was not very excited about getting up Sunday morning, the day after a long trip, and going to a rural church to preach and commission a group of businesspeople who had attended the DML training.  Like Renita, I was not sure how and if DML business training would work in a country known more for it mountains and internal fighting more than business development.  As we drove to the village church, I was thankful that it was the dry season, otherwise we would never have made it by car.

Upon arrival, I was ushered into the church and seated at the front of the assembly. The church walls consisted of rough wood and banners all around and a dirt floor. There was excitement that someone from so far away came to their church to commission the first marketplace ministers.  The small church was full with about 200 people.  The windows in the back of the church were also filled with people who could not find a place to sit. 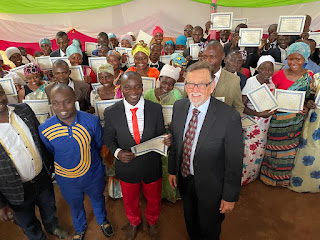 What struck me was the zeal as they worshipped with song and dance.  Men, women, and children would take turns jumping up to sing and dance as they worshipped.  I soon found myself again enjoying the African beat and songs.  These men and women are mostly farmers, working on very small plots of land to grow enough food to feed their families.

I preached a sermon on “commissioning” appropriate to the occasion.  Any time I mentioned that God loved the poor, there was a hardy amen!  After the preaching they called up those who had gone through the training.  Forty-five people came up to be commissioned as marketplace ministers.  I was surprised at the large number that had gone through the training.  After the commissioning, they invited members of the group to share why they thought the training was helpful.  Here is a sample of what I heard:

“Before this training I went to my garden, weary before even starting. I would be working all day for barely enough to feed my family.  Work and more work.  After the training I realized that my work was something God desired of me.  I was not simply working to feed my family, I was working as a way of worshiping God!  My neighbors began to see a change in me.  They wanted to know what had happened.  Now I was not only working for God, but also evangelizing!”

A pastor, who was trained said, “As a pastor, I had been taught that to serve God is to preach the gospel and get people saved.  I had a small plot of land, but did not have time to farm as that was not serving God.  This led to my children not having enough to eat and my wife being unhappy because I was away evangelizing.  At the training, I learned that God worked and created us to work.  I began to understand that the farmer also serves the purpose of God through their work.  I still do evangelism, but now I also farm.  My children have enough to eat and my wife is happy that I have made a commitment to being home more.”

The senior pastor looked at me and said, “You cannot know what a change the training has made.  The whole church wants to be trained. After seeing the first group and the change in their lives, people are begging me to give another training so they can learn as the first group did.  Please come and teach us how to worship God through our work.  We are ready!”

Can you do “business” training with a poor nation consisting mostly of small scale farming?  Absolutely.  To validate what they do as a call of God changes their perspective validating them and their work as being part of the mission of God.

On our last day in Burundi, we had a meeting in the capital of Bujumbura with about 15 Bishops of major denominations, as well as presidents of national church groups (Burundi reports to be 97% Christian).  After doing a short three hour presentation on a Saturday morning with these men, the overwhelming response at the end of our time together was a chorus of "we can't wait for this...we need this now."

Apparently there have been reports for some years that there will be a revival coming to the Church in Burundi and there have been arguments about which denomination will start it.  After our presentation, they said that they now see that it's not about denominations at all but about Christians in the Marketplace.

We are now in Tanzania where we will spend the week with more incredible leaders, including speaking to the Assemblies of God Tanzania.