On the Road In Nigeria Week 3: Sannu! 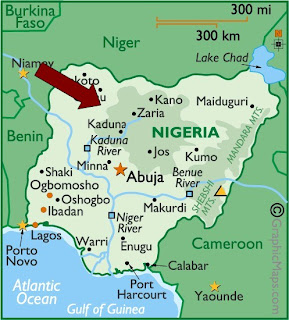 Sannu!  (Hausa greeting)  Week three is behind me and I am now on week four of my five week trip in five countries.

I was joined last Sunday by Dana Boals, the Director of Global Partnerships for Partners Worldwide. We left early Monday morning (4 am) for Nigeria.  Our goal on this trip was twofold:  one, to visit the East Kambara Area (EKA) of Nigeria, located in the North-West, where one of the two projects of Partners Worldwide, called Water Wins, is taking place.  The second goal was to give a Training of Trainers to the affiliate leaders of the other project, called PCEN, on the business training curriculum of Partners Worldwide. 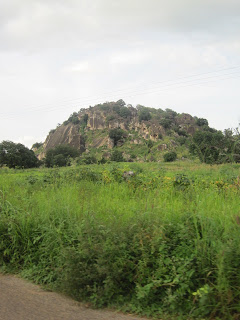 We landed in Abuja and were picked up by Jeremiah Yongo, the Nigeria Partnership Manger for Partners Worldwide, and began the 8.5 hour road trip north to the EKA.  This trip consisted of about six hours on fair roads (West Africa standards) and the last 2.5 hours on terrible roads (56 km or 31 miles).  Most of the trip was going through rural areas and small towns; the terrain was beautiful. You just can't capture it in pictures  I did try.

The EKA is a very rural area, made of of many villages of a number of different tribes.  The work of Water Wins is primarily to drill wells in these villages, coupled with latrines, immunizations, and evangelism.  This project is somewhat outside the scope of what Partners Worldwide typically does, but the goal is to bring this area to the point where business development can take place.  To date, 235 wells have been drilled and seven evangelists are working in these communities.  The community members report a decrease of 50% of childhood deaths because of the work of Water Wins.

As I was doing the training all week, I did not have a chance to visit these villages.  However, Dana was able to and she shared with me what she saw.  She went to see two villages - about a half mile apart from each other, both a little ways off the main road.  The first village greeted her, along with Isaac, the Water Wins staff person, warmly and enthusiastically.  Dana reported that the adults and children looked healthy and happy.  The parents told Dana that their children aren't dying anymore because of the clean water.  The second village did not have the same story.  Dana reported that the difference was startling.  The children looked malnourished, with large stomachs and rust colored hair; the adults had a number of obvious health issues as well.  The children were terrified to see Dana.  It was a much more uncomfortable visit.  As they left the place, Dana asked Isaac how it could be that two villages, so close together, both with wells, could have such a different look and feel?  Isaac responded by telling Dana that it was because the first village gave their life to Christ - the second refused.  That made us scratch our head.  How could faith alone account for such a contrast?  The villages both had access to the same food, water, weather.

In discussing this later with Jeremiah, he told us about the long history in that area.  This area had been subjected to Muslim slave traders over one hundred years ago.  The particular tribe in the second community had resisted converting to Islam at that time, and fought hard to maintain their independence and safety.  That resistance and insecurity led them to isolate themselves from the rest of the world, to the point that the children in that village, though living just 1/4 of a mile from the main road, had never been to the main road up to this day.  Additionally, animist beliefs create a victim mentality as it relates to health, sickness, death, etc. - it is a result of spirits - so the adults tend to be less intentional or willing to explore proactive health choices.  And the same resistance to becoming Muslim is now being applied to becoming Christian, therefore the freedom that Christ brings is not available to them, keeping them feeling continually subjected to the will of the spirits.

The Training of Trainers that I conducted with ten persons was enjoyable.  I had three representatives from three affiliates in three different cities:  Jos, Takum, and Mkar; in addition, Steven, the PCEN staff and leader of this group was also in attendance, making the group ten.  It was a great group, with invigorating and stimulating discussions.  These leaders are deep in the work in the field, looking for ways to build business capacity in their community and church.  It was a comfortable setting with much dialogue, and everyone remained invested in the conversation - especially about Business as Mission, but they also engaged Cost Analysis, Income Statement, and Balance Sheets!

As I write this, I am now in Liberia, hoping to be able to get to Côte d'Ivoire this week.  The border between the two countries is currently closed due to conflicts, so I'm not sure if they will let me across.  I'll let you know next week!