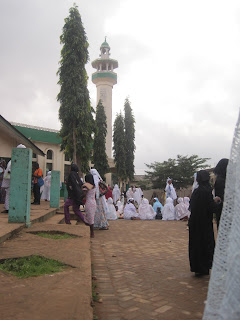 Friday was a National Holiday in Ghana and in many countries around the world with a high Muslim population.  The Muslim population in Ghana is around 15%.  The name of the holiday is Eid ul-Fitr, which is Arabic for "festivity concluding the fast", and marks the end of Ramadan.  Ramadan is a thirty day fast from eating, drinking and sexual relations from dawn to sunset that Muslims partake in for the purpose of learning about patience, humility, and spirituality. During this time, Muslims ask for forgiveness for past sins, pray for guidance and help in refraining from everyday evils, and try to purify themselves through self-restraint and good deeds.  Charity and prayer are important parts of this time. 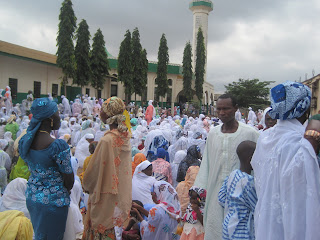 As Hannah and Noah did not have school on Friday, we decided to attend the Eid prayers at the Madina Central Mosque, not too far from our place.  [I use the term "we" loosely - if you remember in an earlier blog, I wanted this next year to be a year of learning more about Ghana.  The kids agreed, in theory.  Actually going out of our comfort zone is another issue.  But after some negotiation, they agreed to get up early on their day off from school to attend these prayers, and they were both good sports about it.]  We arrived at 8 am, when we were told the prayers were supposed to start, but only a handful of people were there.  We passed through a long line of people waiting to receive alms and then sat down to wait and do some people watching. After some time passed, people began to stream in - women were on the side of the building that we were on, while the men went to the other side. 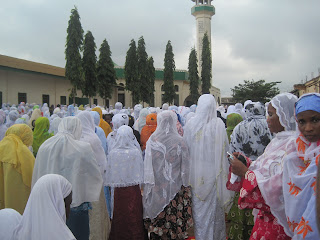 Everyone was dressed in beautiful clothes and the women all wore a white head wrap.  The stream of people after a while was amazing and I was surprised how many Muslims were in this area of Greater Accra, especially when I found out that there was another Mosque, just down the road that was full also.  After a while it suddenly got very quiet and the prayers began.  The prayer time was actually quite short and immediately after that people began to break their fast.

It was a good experience, especially as we have been intentionally learning more about Islam over the last few weeks - a good number of students at Hannah and Noah's school are Muslim, as are business owners with whom I work.  I appreciate their discipline and desire to serve God.  There is very little I know about the Qur'an and I think it's important that we become knowledgeable about it.  John 10:16 says, "I have other sheep that are not of this sheep pen.  I must bring them also.  They too will listen to my voice, and there shall be one flock and one shepherd."

Posted by The Reeds in the Wind at 3:41 AM No comments: