Weather:  Harmattan winds have passed and we are able to see the sky again, free from dust.  Temperatures at mid-day are low 90s, humidity at around 80%, and the heat index is low 100s.

Off to Liberia:  As you read this, I will be on my way to Liberia.  On February 18-19, LEAD will be hosting their fourth conference, "Africa's Marketplace Revolution.  We expect to have over fifty international guests coming for this, from eight different countries.  Lord willing, the President of Liberia, as well as the Auditor General, and the Executive Director of Partners Worldwide will all be plenary speakers.  We hope and pray that this will be a meaningful time of networking, learning, and reclaiming the redeemed Marketplace for God.

LEAD's Research Farm:  In other news in Liberia, this past week LEAD had the ground breaking ceremony for a 25 acre research farm!   Some funds have been raised to begin this project and a partnership has been formed with the community to build this research farm.  We hope to build a training facility and several barns - we plan on showcasing several appropriate technology methodologies which can allow farmers to farm year round instead of only during the rainy season as well as ways to increase crop yields.  We hope to experiment with different crops that can benefit Liberians and farmers. We hope to introduce various animal husbandry projects and then teach them to farmers; we hope to add various value chain methods, such as solar dryers and other food processing techniques that, once proven successful and marketable, can be introduced to entrepreneurs.  As you can see, we have a lot of hopes!

Passing of a friend:  For those of you who have been with us for some time, you will be sad to hear that Vera Brown, the woman who worked in our home for several years, passed away this past week from cancer of the uterus.  If you remember, Bob wrote a post comparing her house to ours called, "Let's Play Our Home versus Vera's home."  Vera was still living in this house when she died.  (To see that post, click here.)   Vera leaves four children behind.  I look forward to sitting with the family for some time while in Liberia.  I'd like to think that Bob was one of the persons who greeted her in Heaven. 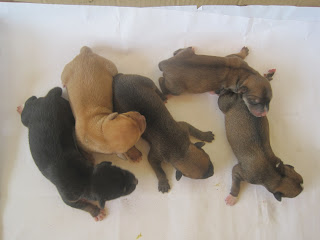 More puppies....again:  Both of our female dogs had puppies yet again.  Just as the last time, all of Faith's six puppies were born premature and died - one made it for 48 hours, thanks to Noah's diligent efforts.  Dusty had five healthy puppies and they all seem to be doing well.  We REALLY want to get Jack fixed but know that there is a real risk of him dying to have that operation here.  Now we need to find homes for these mutts in a few weeks - in the meantime, they are cute.
Posted by The Reeds in the Wind at 1:17 AM No comments: