[A number of you have written me about the matching grant for my support as to how long it goes and it will be available until the end of December. Thank you!]

As I think back to the orphanages that I have seen across Africa, I know there have been times when that term applies.  The taking of children from parents and bringing them to an orphanage, promising a better life, but not delivering on that promise, is unfortunately a common practice.  Parents who love their children, being pressured to give them up because of poverty.  I remember a family in Liberia who had beautiful twin girls, told of frequent visits from one particular orphanage director, trying to talk the parents into giving up their girls, telling the parents that they (the orphanage) could give the girls a better future than they could as parents.  Four out of five children in an orphanage in Haiti have at least one living parent.  I would guess the same is true in many parts of Africa.

Some (dare I say many?) orphanages then intentionally keep children in squalor to pull on the hearts of generous North Americans who can't resist helping a poor child. They intentionally keep conditions harsh, keep resources from the children, overcrowd rooms, in the hopes of getting more donations.  This is what leads to the label of trafficking.

Many are saying that orphanages should be banished around the world.  Orphanages are a relatively new phenomenon in Africa, where traditionally a child would be taken in by relatives if the parents died. 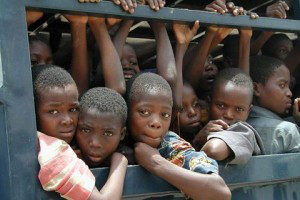 What is definitely true is that we need not just have a heart to help the poor...but we also need a mind to help the poor.  Putting children in institutions, away from their parents, makes no logical sense.  Helping parents to keep their children, to be able to afford to meet the needs of their children educationally, nutritionally, and medically, is where the concentration needs to be.

One of the things that we have begun to hammer with people is that the only institution that is at the root of poverty alleviation is business.  When people say that church or government is the primary player in terms of poverty alleviation, we ask, "Where do churches get money?  Where do governments get money?"  The answer always is from members/citizens, who get their money from business.  Business is involved in wealth creation.  Church and government are involved in wealth redistribution.

So we have become bolder at telling people to become wealth creators.  To not look to the church or government for relief, but to diversify their income streams by doing something, however small.  Too many people are graduating across Africa with degrees but there are no jobs.  As Poverty Cure says, we need to train job makers, not job takers.

So let's educate ourselves about orphanages.  Let's stop supporting the part industry that removes children from their parents.  And lets figure out how to help the poor in ways that will provide long-term sustainable changes.

In this Christmas season, have a heart for the poor.  But also have a mind for the poor.  Find ways that can help families to keep their children, the best and most loving choice for almost all children.
Posted by The Reeds in the Wind at 7:15 AM No comments: