Where has the time gone? It's already August and time for a Reed Family Update.

Noah completed his Summer Academy course at Calvin College and was very pleased to have a college credit to his name, prior to his older sister.  He took the Intro to Film and Media class, which he enjoyed, although did admit that it was challenging.  He is pretty sure that he would like to attend Calvin College next year and is looking forward to college life.  He has had the last couple of weeks off and was able to join me for a week of vacation at the cottage of some friends (Jeff and Jennifer Keessen) on Big Star Lake, where he very much enjoyed driving the jetski.

He returns to Ghana in about a week (August 16) where he will have already missed a week of school, as they are starting especially early this year.  He will return by himself and will be staying with the family of his best friend, Armand, who is from South Africa.  This is his last year of highschool, even though he is 16, because he skipped the first grade.  He isn't particularly looking forward to returning to Ghana, and would rather go to the Potters House High School, so please pray for him! 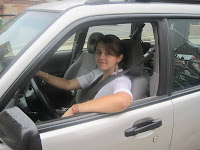 Hannah has been very busy this summer, working full time at AMDG architects up until last week when she dropped down to part-time.  She has enjoyed her time at AMDG and has learned a lot about architectural work and also about herself in the process.  She has also been learning to drive, driving every chance she can get, with the hopes of getting her license before I leave for Ghana. Hannah will be moving into the dorms of Calvin College on August 29, prior to her orientation, and has been communicating with her roommate as to how to decorate the room.  At this point she plans to get her Bachelors in Social Work (BSW), hoping to continue after for her MSW.  She is dealing with some "third culture" issues - if you are unfamiliar with that term, Hannah and Noah are considered third culture kids (tck - they even have books out on this stuff, especially for military kids) because they don't exactly fit in the US culture anymore having lived six years in West Africa and being exposed to a completely different culture and world; on the other hand, they don't exactly fit in the West African culture, because they are American and were 10 and 12 when they moved there.  So they are third culture kids, not exactly fitting anywhere.  So she is dealing with some adjustment issues, which is to be expected, and frequently talks about wanting to go back to Ghana.  [Grass is always greener on the other side of the fence - Noah, who is going back, doesn't want to go; Hannah, who is not, wants to go.  :-) ]  She is not looking forward to being so far away from Noah and I; and we are not looking forward to being so far away from her, so please keep her in your prayers as well!

As for me, this summer has been just what I needed.  The silent retreat was the highlight of the summer, followed by good times with family, a vacation, good reading and learning time - I had set a goal to learn more about the Muslim faith this summer and was able to do that during my vacation.  Work has been very busy as well, with trips to many and various places, meeting with different churches, businesses, and individuals who are involved in West Africa.  I have one trip to go yet to Wisconsin (for the Rural Empowerment Initiative in West Africa) and Iowa (for our partnership in Cote d'Ivoire), from August 17-24.  Hannah will be my chauffeur and I'm looking forward to that alone time with her in the car.  A couple of highlights from my work this summer:
Emily will arrive in Ghana just a couple of days ahead of me (I leave on September 2).  Her time will be focused on continuing to work with the Hopeline Institute staff on developing the Small and Medium Entrepreneur program, specifically the training and mentoring portions. If you are interested in learning more about Emily, her blog can be found at http://emilydaher.wordpress.com.

We also have an intern going to Liberia, Megan Fraga, who hails from Florida and is a recent graduate of Florida State University with a BS in International Affairs.  Megan is currently working in Sudan for the summer and was unable to attend the orientation at Partners Worldwide, and will leave directly for Liberia from the Sudan on September 7.  Megan's blog can be found at http://meganfraga.blogspot.com.

We are still looking for an intern for the research farm in Liberia.  If you know anyone who has knowledge and experience in agriculture and would like to spend some time in a tropical country, please email me at renitar@partnersworldwide.org.

That's it for now.  More next week!
Posted by The Reeds in the Wind at 3:47 AM No comments: