The Billionaire Who Wasn't

As money is a frequent topic in my travels and teachings, it has come up more and more that the greater question that can be asked in terms of giving back to God is not "how much do you give" but rather "how much do you keep."

I often tell the story of a day when Hannah and Noah were just 9 and 7 years old and were discussing what they would do if they won a lottery of 10 million dollars.  As I walked in the room and overhead this discussion, Hannah looked at me with a big smile and said, "Mommy, if I won 10 million dollars, I would give 9 million to the poor!"  I should have hugged her and thanked her for her generous heart.  I should have recognized her desire to please me, as she know how her parents were striving to serve the poor.  But, in not my finest hour as a parent, I said, "Why do you need one million dollars?" 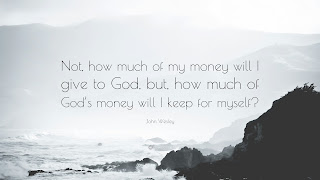 My point (which went over the head of a 9 year old) is that we can feel good about giving away 10% or even 20% of our income in our tithe and offerings but that doesn't mean that we are living a sacrificial life.

A story that comes from The Irish Times and helps to illustrate the point:

Chuck Feeney today is a man of no property. He and his wife Helga live in a modest rented apartment in San Francisco. He has no car or luxuries of any kind. Actually, come to think of it, he has a very nice watch. It is plastic and cost about $15. There are no trophies or vanity photographs in the apartment to show that he has devoted his $8 billion fortune to making the world a better place.

It was always so with Feeney, a brilliant entrepreneur who became a billionaire through the company he co-founded, Duty Free Shoppers, back in the 1960s. The frugal globe-trotting philanthropist routinely flew economy class, stayed in small flats, and ordered the second-cheapest white wine in restaurants.

The key moment in Chuck’s giving career, one that was to enhance the lives of millions of people, came on November 23rd, 1984. On that day Feeney, his then wife, Danielle, and his lawyer Harvey Dale, flew to the Bahamas, a location chosen to avoid huge legal penalties for what they were about to do. They gathered in a rented conference room. At 4pm Chuck began signing a series of documents. Then they left for the airport.

While millions of Americans expressed gratitude that Thanksgiving weekend for their material blessings, Chuck Feeney felt a profound sense of relief. He had just divested himself of all that he owned, cash, businesses and shares, and placed them into a foundation he created, known today as Atlantic Philanthropies.  It was done in the utmost secrecy. Feeney continued to manage the businesses, and buy and sell properties around the world, so everyone thought he was still a billionaire, even Forbes magazine.

‘The right thing to do’

I asked Chuck more than once why he decided to give it all away. Never one for introspection he replied simply: “It was the right thing to do.”

I believe the reasons included an innately generous personality, discomfort with the trappings of wealth as a product of an Irish-American neighbourhood in New Jersey where “nobody blows their horn”, and the example set by his mother, a nurse who was always helping others.  He was also influenced by Andrew Carnegie’s essay The Gospel of Wealth, with its famous declaration that “the millionaire will be but a trustee for the poor”.  After that day in Nassau, Feeney began a lifelong quest to do good things with his wealth, while growing the businesses and property portfolio to provide more funds for his foundation’s giving...

...A critical moment came in New York on March 3rd, 2003, when Feeney signed off on a decision to spend everything in his lifetime. “Giving while living,” he called it. Foundations usually dole out 5 per cent annually to maintain perpetuity. Chuck wanted to do big things, especially with bricks and mortar.  “If I have $10 in my pocket and I do something with it today, it’s already producing 10 dollars’ worth of good,” he explained to me one day in his New York office, wearing a cardigan with a hole in the sleeve. “Giving 5 per cent doesn’t do so much good.”

Now aged 86, Feeney’s travelling days are over, but as he tucks into his favourite dish – chicken – in his Bayside restaurant he can reflect how his example has exploded in philanthropy. He got a letter one day from Amit Chandra in which the Indian billionaire confided he was so inspired by Feeney’s story he has devoted much of his own wealth to creating schools, hospitals and universities. He thanked Chuck for the “joyous journey” this entailed.

Conor O’Clery is the author of the biography of Chuck Feeney, The Billionaire Who Wasn’t (https://www.irishtimes.com/news/ireland/irish-news/chuck-feeney-the-billionaire-who-gave-it-all-away-1.3413084)

I love the declaration that the "millionaire will be but a trustee for the poor."  That completely flips the world of consumption upside down.  HOWEVER, the work of generous giving needs to be coupled with competence.  How we give also matters.  The majority of the poor don't need a trustee, as they are fully capable if given opportunities and access to networks.  But they do need opportunities, a hand up, restoration of their dignity, and an affirmation of their potential to fulfill their calling of being made in the image of a creative, working God.

One idea that someone gave me years ago (I can't remember who) is that for every year of marriage, they increase their tithe by one percent.  I have tried to live this way and found that the incremental increases were doable.

The question of how much money I keep for myself is one that needs to be wrestled with individually before God.  May God give us the courage to have open hands before Him.
Posted by The Reeds in the Wind at 7:34 AM No comments: