"Have a safe trip."  How many times have we uttered those words to loved ones before a trip?  If you are like me, you have said it many times, often without thinking. In North America, most of the time it is said without much conviction that there will be a significant problem:  roads are pretty safe, air travel is pretty safe, walking is pretty safe.  In Africa, those words take on a whole new meaning.  Praying for traveling mercies is not something that is said lightly.  Additionally, after praying for a safe trip, how many times do we forget to thank God for traveling mercies?  Again, if you are like me, you only remember when there was a close call.  Not in Africa.  People regularly pray for traveling mercies and seem to always remember to thank God for safe travel.  My trip to Kakamega yesterday may shed some light on to why this may be. 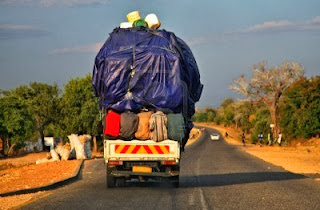 Driving in the dark has not been a practice of ours in the eight years that we have lived in Africa.  We have done everything we can to avoid it.  The business class that was held at the Deliverance Church in Kakamega ran from 2 pm - 5 pm, resulting in the return two hour drive taking place mostly in the dark (especially as we did not get out of class until about 5:40 pm).  Since I had class again in Kitale on Monday morning, I thought driving back Sunday evening would be necessary.  And the rule for not driving at night was mostly true for West Africa, I rationalized to myself.  I had yet to test the need for such a rule in Kenya.  Suffice it to say, I learned my lesson - the same rule does apply - and I will find alternatives to driving at night even if I have to stay in Kakamega late and need to be back in Kitale early the next morning!

Here are a few reasons: 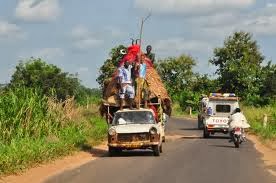 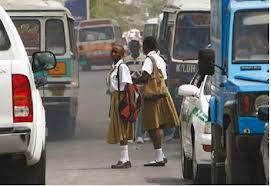 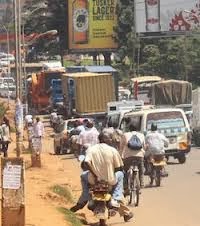 So last night, we left for Kitale at dusk, enveloped in darkness about thirty minutes into the trip.  The roads were wet and muddy with rain.  As we rounded a bend in a road, going down a hill, a matatu (van-bus) was foolishly trying to pass a lorry, going uphill and around a blind corner.  A head-on collision seemed imminent.  The next five seconds passed very slowly as I stepped on my brakes and found my car sliding due to the wet roads and mud filled (slightly bald) tires.  Looking for a path to avoid collision, there was no shoulder on either side as the road was up against the bush.  By the grace of God, the matatu was able, at the very last second, to swing in front of the lorry and we passed without a collision.

And so today, even though I had a different blog prepared, I felt I had to take a moment and thank God publicly for traveling mercies.  And I have promised not to do this ride again at night.  And as we speak, the mechanic is working on my brakes as well as replacing the two front tires.  I have joked that I want a Kenyan shilling for every person that I avoid hitting - while I say that with a smile, I know that EVERY DAY that I do not have an accident is through the grace of God and because of His protection.
Posted by The Reeds in the Wind at 6:29 AM 1 comment: