From a Flood to an Ocean

I arrived at the guest lodge in Dar es Salaam at midnight on Sunday, March 11, with three suitcases 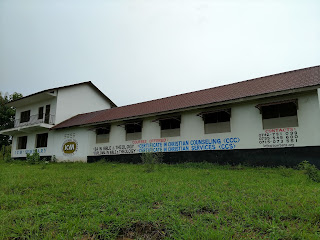 and two pieces of hand luggage in tow.  The trip had gone smoothly but, as always, was tiring as I rarely sleep on planes.  We arranged for an 8 am start for the day, just a short eight hours away, but our trip in Tanzania was only for three days so we had to make as much use of the time as we could.

A little bleary-eyed and brain-cloudy, we started off in meetings on Monday morning.  Partway into the meeting, we heard it start to rain.  James Kamau, the principal of African Theological Seminary Tanzania and our host, immediately stopped our conversation and said, "We need to pray that this rain will stop.  If it begins to rain hard, no-one will come to the workshop tomorrow.  The roads will be too bad."  So pray we did.  After about ten minutes, the rain stopped for the rest of the day.  We were thankful.  We were able to see the campus of the Africa Theological Seminary (ATS), which is only a couple years old on their new property (they outgrew their last facility).  It is beautiful.

After a full day, we finished with a dinner outside at the guest lodge, where I was eaten up by mosquitos (and I had forgotten to start my anti-malarial medication), and then I was more than ready for bed.  At around 3 am, it started to pour.  And pour.  And pour.  By 4:30 am, I stopped praying for it to stop as the damage had been done.  My colleague, Rev. David Champness, the new president of ICM-USA, was in a lower part of the guest lodge, and he gave up trying to sleep at 4:45 am, as he heard some of the staff sweeping water.  He swung his legs out of bed and stepped into two inches of muddy water in his room.  His suitcases and some electronics were all on the floor, but thankfully nothing was permanently damaged (lesson:  keep your stuff off the ground if possible!).  Yikes.  The road in front of the guest lodge was a river.  Mud covered everything.  It was a mess.  But my room, thankfully, stayed dry.

We had expected about fifty people at our event but what could we now expect, given this situation?  We expected very few.  But we continued to say, "Whoever the Lord brings..." 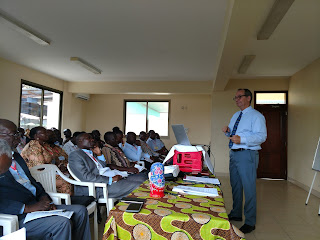 It appears that the rain was worse on our part of Dar Es Salaam than other parts, however, and we are happy to say that we had 56 pastors and church leaders at the event.  Praise God!  We are thankful that even when people have to battle mud and huge pot holes and mosquitos and torrential rain, that they continue to attend to what God has for them to do.  We were blessed by this group and the dynamic conversations that came out of our time together.

At the end of the day, we were told by the ICM Tanzania country director that he was going to take us out to dinner.  We were tired (having not slept much the night before because of the rain) but again, as time was short, we had to make the most of it.  "As long as there are no mosquitos," I thought to myself.  We pulled up to a hotel on the beach...and well...I can let the pictures speak for themselves. 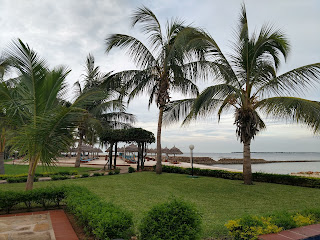 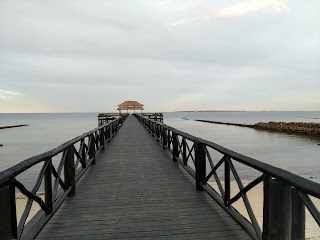 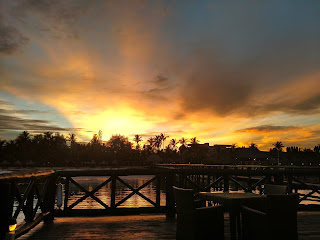 The heavens declare the glory of God, the skies proclaim the works of His hands.  Day after day they pour forth speech; night after night they reveal knowledge. (Psalm 19: 1-2)

From a flood in the morning to this sunset at night over the ocean.  What a delight to serve such a creative God. 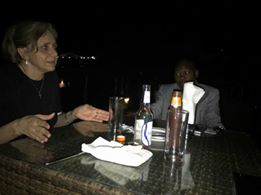 Of course, the beautiful setting didn't prevent us from still attending to business (as can be seen by the picture of me earnestly talking)...nor did the darkness...nor did the wind from the ocean prevent mosquitos from finding my legs and enjoying their own dinner on me.  We accomplished what we came to do in those three quick days and the next day (Wednesday) we went straight from the workshop venue to the airport, where we flew to Kenya.  The next morning (Thursday) I started teaching Integrity and Finance to the ATS in Kitale.