Switching from Elephants to Grasscutters

We thought it was time to take a brief break from filling you in on our grief work to bring you an update on the other work that is going on at the Reed household. Although it has been difficult to give our full attention and concentration to other work, it has been a necessary distraction at times from the grief work.

Hannah and Noah are finishing up 11th and 10th grade, respectively. Exams start in two weeks and then they will fly back to Grand Rapids on June 7. Thankfully, we happened to book the same flight as another missionary family (the same family who was so helpful after Bob's death - Jeff and Laurie Korum), so Hannah and Noah will fly with someone they know. Noah will spend a few weeks with long-time friends, the Steenwyks, and have the opportunity to work on their farm. Hannah will stay with her aunt and uncle, Janette and Dale VanderVeen, do some volunteering with the Grand Rapids Public Library, and hang out with her Potters House friends. I will finish the class that I am teaching in Ghana, spend a week in Liberia, and another week in Cote d'Ivoire, then join the children in Grand Rapids for a little rest and relaxation. We will return to Ghana on the first of August. It's hard to believe Hannah will be a senior and Noah a junior. Hannah will be making decisions soon about college.

In the meantime, my work has continued with Partners Worldwide in Ghana, Liberia, and Côte d'Ivoire. In the five weeks since I've returned, there have been various projects that I have worked on for each of our partner countries. One of the more major projects was to finish something that Bob and I had started prior to his death - the delivery of grasscutters for a demonstration farm in Côte d'Ivoire. What exactly are grasscutters? Not lawnmowers as some people have guessed, but an animal, known also as a cane rat, from the genus Thryonomys. Grasscutters are valued as a source of "bush meat" throughout West and Central Africa. Our partner in Danané, Côte d'Ivoire, with Director Dea Lieu, was working on re-establishing their demonstration farm where they had produced hundreds of grasscutters prior to the 2002 war. While they looked at options to buy these in Benin, we realized that it would be much cheaper to buy them in neighboring Ghana. With Bob's agreement to help me (since he's the animal lover), we started meeting with grasscutter farmers in the greater Accra area. That was then interrupted by Bob's death, and the team in Danané patiently waited until I returned to Ghana.

Once back in Ghana, it didn't take long for me to realize that I needed to get moving on this project on my own. Thankfully, a Ghanaian from the affiliate with whom we are working, stepped in to help me, and before long we had arrangements to buy six colonies (4 female, 1 male), the boxes constructed for transport, the medical certificates from a vet, and in the process I also had to become certified as a "Wildlife Exporter" with the government of Ghana (yet another strange thing I can add to my resume). Déa and I agreed to meet at the border town of Elubo, about 150 kms from Abidjan (750 kms from Danané) and 350 kms from Accra. Early that morning, as I prepared to leave, I needed to feed the grasscutters before getting on the road. As I reached in to put a second bunch of grass in one of the boxes, to my horror, one grasscutter got out. As I froze, in a split second, a second one escaped. I quickly recovered and shut the gate on the box, all the while yelling for Noah (at 5:45 am) to get out and help catch them. The dogs (all three) very quickly decided to "help", caught and killed one within seconds. Hannah got out of the house first and tried to hold all three dogs - not an easy task to do when they are on the hunt - while Noah and I tried to catch the other grasscutter. Noah eventually caught the other one and it was returned safely to her box. In hindsight, it was probably quite a comedic sight as we chased dogs who chased grasscutters; then we chased grasscutters while the dogs were trapped inside the house. The grasscutters are now safely in Danane where we hope and pray that they will bring the needed protein to the people there. Danane is still in rebel held territory and the people of Cote d'Ivoire continue to be a nation divided as they wait for an election (since 2005). Poverty and malnutrition are on the rise in this country and we ask for your prayers. 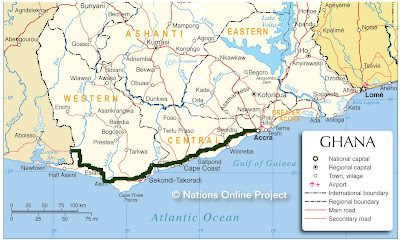 The black line indicates the road we took from Accra to the border town of Elubo. 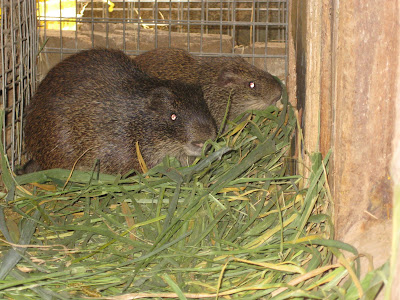 Here are the cute little rascals, looking all innocent while mischievously plotting their escape. 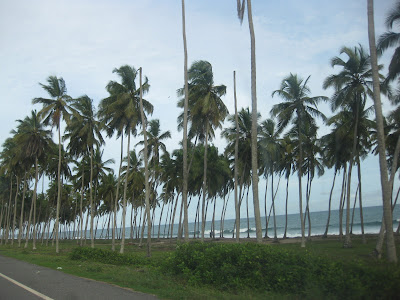 The road going through Cape Coast. 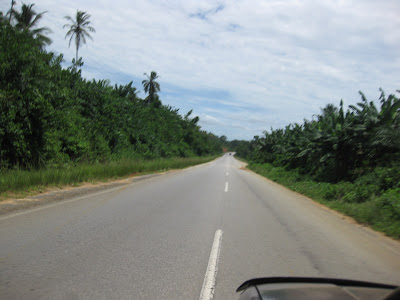 The road to Elubo, the border town between Cote d'Ivoire and Ghana. Note the great shape the road is in - the road was good almost the whole way, only about 20 miles were a little rough. 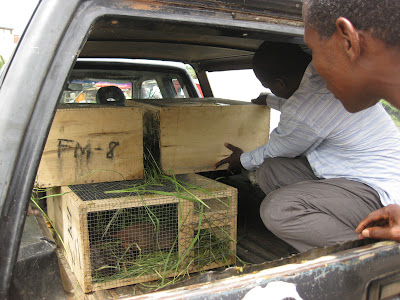 Déa Lieu, the Director of ACLCP, giving direction to Pastor Dah, the Chairperson for ACLCP, on how to place the grasscutters. Delivery is complete!

Posted by The Reeds in the Wind at 4:11 AM No comments: