When God is Silent

Weather: The rainy season has definitely arrived in Ghana, with rain falling fairly regularly and the temperature about ten degrees cooler, around 85 F for the high, with humidity around 75%. Makes for more comfortable evenings and sleeping. This morning was a cool 78 F which of course meant I needed a blanket during the night.

This week has had its highs and lows: Hannah and Noah made it safely to Grand Rapids and have begun to spend some fun time with friends; I'm dealing with some lonely times in Accra but trying to figure who Renita is by herself; I had an enjoyable Sunday with some friends and then drove through some serious post-Ghana win traffic, right after they won their game at the Fifa 2010 World Cup. I enjoyed driving through that traffic more than the game - it was great watching everyone celebrate, sing, dance, and be unified together. Pictures are below.

Underlying all these changes and events, continues to be grief. Next week Sunday is Father's Day as well as the third month anniversary of Bob's death. Hannah wrote the following in the airport on the way to Grand Rapids, which she agreed that I could share with you:

Bad stuff happens. It happens to everyone, in varying degrees and in different situations. We have all experienced crisis. Many times, a response of ours is to question God. And many times we find that God is silent. After the earthquake in Haiti, I had questions about God’s love and justice. For most bad occurrences, I could usually find a satisfactory conclusion that allowed God to remain good in my mind, despite how bad the situation was. For example, the situation could test a person’s faith, make them a stronger person, allow them to touch lives with a story, or things like that. However, after the huge earthquake in Haiti killed thousands and destroyed the homes of so many, it was a lot harder for me to find the good in the situation. I prayed about it, wondered, and was very confused. God didn’t provide me with writing on the wall, or a page in the Bible that randomly appeared to appease my curiosity. But as time went on and the incident faded from the front of my mind, I stopped searching for a reason and settled into the idea that I would never know and would just trust God’s goodness through this storm in Haiti.

And God was silent. I couldn’t hear Him. He didn’t give me a logical answer, didn’t write on my wall, and didn’t give me an epiphany. He felt distant, and I felt abandoned and alone in my grief, with just my family around me. The all powerful God that I served and loved was gone. I felt that there was a wall up, one that I couldn’t demolish and didn’t have the energy to climb, that separated me from God and His love. I was frustrated and angry about His silence and about the peace of mind that eluded me. It didn’t seem fair or right or just or loving or any of the things that God promised to be and give to us as children that He professed to love. It felt so hopeless. There was no way out of this ditch that I was in, no one could help me, and I surely couldn’t do it. So I stayed in the ditch. Even when the ditch didn’t seem so deep, I had become used to the darkness and didn’t want to move.

Thankfully though, God gave me the will to move, to begin to scale the ditch and work myself out of the hole that I was in. I am not out yet. I don’t know when I will be out. Each day I take slowly, sometimes I make progress and other days I regress deeper. I have begun to accept that I will probably never know why my Dad died. I will never know why innocent babies die of illness before having a chance to live. I will never know why innocent people die in a natural disaster that could never have been predicted. I won’t know. I can hypothesize to keep myself sane, but the knowledge will have to wait until I meet my Father- both earthly and heavenly- and ask him the questions I have. It is frustrating and hard, and some days I just wish I could curl up in the ditch, not exert any effort, and not attempt to move on in my grieving. But I also realize that this is my own stubbornness and elephant and devils that tell me the opposite of what I need. There’s a lot more I could say here, I could go on and on about my feelings and emotions regarding God and suffering and grief, but I think I’ll stop now before I write a book.

Yesterday (June 6), in church, I ran across a verse in 1 Peter 1:6-9. It says “In this you greatly rejoice, though now for a little while you may have had to suffer grief in all kinds of trials. These have come so that your faith - of greater worth than gold, which perishes even though refined by the fire - may be proved genuine and may result in praise, glory, and honor when Jesus Christ is revealed. Though you have not seen him, you love him; and even though you do not see him now, you believe in him and are filled with an inexpressible and glorious joy, for you are receiving the goal of your faith, the salvation of your souls.”

Bad things happen, often to the ‘good’ and ‘innocent’. I think the point is we are fallen, and this world sucks (excuse my language, but this is true). It doesn’t seem just that people die to test our faith, and most of us would testify that joy is NOT the immediate response. But when we look back on trials, we can hopefully see that God was working even when He appeared absent. We may not see it for a long time, but the point of faith is not that it is made easy all the time, but that when it gets hard, it endures. If our faith wasn’t tested through trials, it would be almost nonexistent and easily destroyed. Suffering seriously sucks, but I couldn’t live without it. 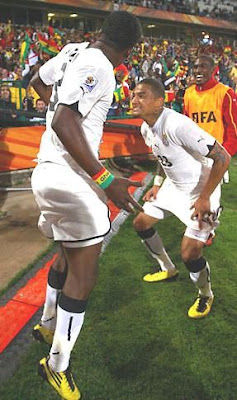 Kevin Prince-Boateng (right) and Asamoah Gyan celebrate the penalty shot
that gave Ghana the victory over Serbia (picture from the Associated Press). 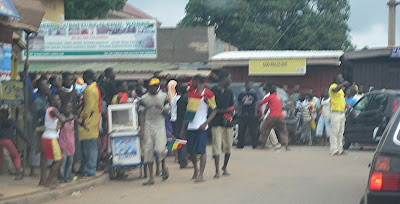 Driving through Madina, the streets were packed with people celebrating and cheering... 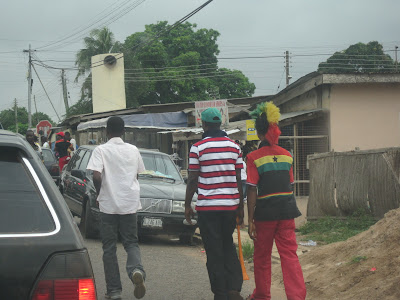 ...and wearing fun celebrative Ghanaian colors.
Posted by The Reeds in the Wind at 4:15 AM 2 comments: