Boko Haram and the House of Rechab

Jeremiah 35 tells the story of the obedience of the Rechabites, who resisted assimilating the culture they were in for over two hundred years.  They were commended by God for their obedience and faithfulness to their father, Rechab, in abstaining from wine, from building houses, from sowing seeds, and from planting vineyards.  It wasn't that God was commending them from abstaining from wine or building houses, and certainly not from sowing seeds - God is clearly pro-house and pro-planting (and pro-wine, given the first miracle that Jesus performed).  God was commending them for their obedience, faithfulness, and steadfastness, despite the pressures around them.

Recently, in Jos Nigeria, I met a man named David who has set up a ministry called the "House of Rechab" where internally displaced children from the villages where Boko Haram has attacked in various parts of Nigeria are being cared for.  He told me the story of how this work started.  He is a pastor and had been working with a missions organization when he felt God was calling him to open his home to children.  Very soon after hearing that call, a pastor from Northern Nigeria approached him to ask if he could take some children who had lost their homes - their parents had no place for them as they too were homeless because of Boko Haram.  Pastor David said he could take some, and the very next day 24 children showed up at his four bedroom home.  He and his wife took them in.  Two weeks later, 52 children came in one day, and the next day 130 children came.  (!!!  That seems so calm to write it that way.  I think I would have said, "Ummmmm...no...I can't take all of these children!!!)  He went from 24 children to 200 children in about 48 hours.  Many were brought by family members who had lost everything because of Boko Haram, asking him to keep their children until they could get re-established again. 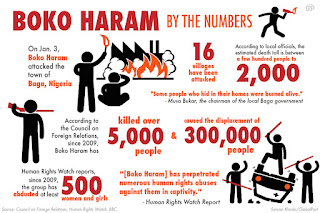 Boko Haram is an Islamic terrorist sect, operating mostly in the northern part of Nigeria for the past six years.  Hundreds of thousands of Nigerians have lost their homes because of Boko Haram, and many have found themselves in refugee camps in Cameroon or other neighboring countries, or in Internally Displaced Persons (IDP) camps in Nigeria.  Life in these camps is challenging, to put it mildly, and finding a place for your children where they can have access to education, and also experience religious tolerance and peace, is critical for their health and development.  Many families avoid IDP camps or refuge camps, choosing instead to find a safe place for their children as they seek to re-establish themselves in another village or town.

Pastor David had learned about Discipling Marketplace Leaders following the two day workshop that was held in Jos this past July.  When I met with him a few weeks ago, he told me that God had been speaking to him about this concept of "work as worship" already and that is why it resonated with him so soundly.  He now has about 286 children and is in a much bigger facility (they grew to over 325 at one point but some children have been able to return to their families, which is their goal).  He has taken his church, which is also located at their facility, through the "Thirty Days in the Marketplace" and has challenged the older children (ages 16+) to start small businesses, giving them 1000-3000 Naira loans ($3-$9 US) to start doing something.  He told us that he has also encouraged his staff to do something in terms of running a business and not just rely on the small stipend they get from the ministry.  One staff member told us that Pastor David told him to start using his car for a taxi business when he finished his shift at the House of Rechab in the evenings, and now it has generated enough income for him to start a hair salon where he is employing one young man.

We pulled in some of the older youth to ask them what they had learned from Thirty Days in the Marketplace, and it was amazing to hear their testimonies.  They talked about how work and business is a good thing; how Jesus was a carpenter; how the disciples worked; how Job was a successful business person; how they need to be producers and not just consumers; that success comes through prayer and hard work.  Clearly Pastor David is teaching them well!

We then walked around the property and could see the entrepreneurial side of Pastor David as well.  They have two greenhouses which are producing great amounts of tomatoes and cucumbers.  They have a vegetable stand where they are selling their produce.  They have fish ponds in development.  They are making liquid soap, bar soap, and detergents, which are also for sale.

For our next steps with them (as Discipling Marketplace Leaders), we will take the 45+ young adults at the House of Rechab, along with the thirty staff, through our microbusiness training, where they will learn key concepts about how to start and run a successful business.  Please pray with us for this training and for this ministry; please also pray about the challenges regarding Boko Haram in Nigeria, and for wisdom and justice on the part of the Nigeria government.

May we all act with the courage, the commitment, the steadfastness, and the faithfulness of the Rechabites, as well as this current group called the House of Rechab, in being obedient to our Lord!
Posted by The Reeds in the Wind at 7:47 AM No comments: