Update from the Road: Down but not Out

I am writing from one of my "homes away from home" in Kitale, Kenya.  I have spent more than three years in this little room.  It is the seventh bed that I have been in since leaving home three weeks ago. 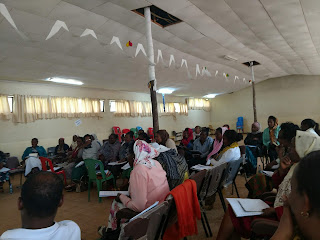 My last trip in June and July of this year was to West Africa.  It was 33 days with 21 days of teaching and 10 days of travel, with one day off in the beginning and one day off at the end.  During that time I was sick four times - each time on the first day of teaching a new group.  First impressions are important and so it wasn't lost on us as a group that each time I was sick was on the first day with a new group.  But I didn't let being sick keep me down - I didn't miss a minute of teaching time and, with God's help, most of the groups didn't even know I was sick.

But my prayer group challenged me to take better care of myself while I travel.  They reminded me that God rested and that I am certainly not stronger than God!  I committed to them to structure in one day of rest each week on this trip.  I have kept that commitment but it has not been easy!  Turning down speaking or preaching engagements, just to take a day of rest, feels like missed opportunities when in a place for such a short time.  But so far I have had the strength to say "no" to more opportunities and "yes" to my need for rest. 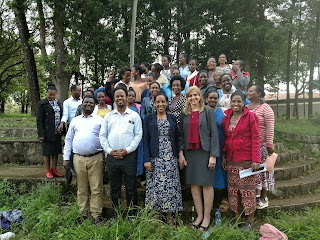 But there was one incident in Ethiopia which was a wake-up call to this again; by "this" I mean the spiritual warfare that we feel we are very much up against in trying to reclaim the redeemed Marketplace.  Last week Sunday, we left Addis early in the morning to drive to Wolayita to train women leaders from the Kale Heywet Church.  They were coming from all eleven regions of Ethiopia.  These are women who oversee over four million women across 10,000 local churches in the denomination throughout the country, and we were excited about the opportunity.  The goal was to train these women, who would then carry the message back to their regions, train their district leaders, who would then work with the local churches.

On the way to Wolayita, there were two very close calls with car accidents involving a donkey each time.  The number of animals on the roads in Ethiopia is amazing!  And donkeys are rather stubborn animals who don't like to move very easily (you see countless young boys struggling to pull or move their donkey one way or another).  But thankfully, we were spared from having an accident.  We arrived at the venue and began to settle in.

The deputy leader for the Women's Ministry, Bizunesh, who had coordinated the event accidentally dropped her phone and it shattered.  All the women coming from the various regions had been calling her for directions to the rather obscure place where we were located and now they would not be able to reach her.  We tried her SIM card in all of our phones but it didn't fit any of them.  She then checked her watch to see the time and realized her watch had stopped.  As the time-keeper for the event, she now had no phone and no watch.  Additionally, she had been coughing all day and had told me it was allergies.  But it now appeared to be a head cold that she was developing and she started to feel miserable.  We prayed for her and then set off for the venue.

We set up the two projectors that we use - one for English and one for Amharic.  The same two projectors that we had used all along on this trip so far both decided to not work.  They kept overheating and shutting down within the first two minutes of being on.  We tried everything to get them to work.  After twenty minutes and almost giving up, we realized it was a strange voltage issue and were able to get a voltage regulator which allowed us to proceed.  By this time, all the leaders from our team were realizing that we were having a spiritual attack of sorts and we were shaking our heads, smiling, and saying that we would persevere! 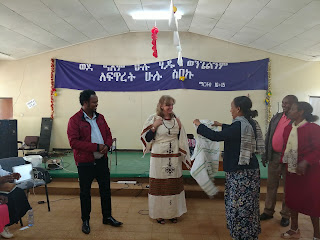 But we weren't through the attacks yet.  I had given the most recent Amharic version on a flash drive to the person who would operate that slideshow.  I watched it being copied to the flash drive.  As I began teaching, I noticed that the Amharic and English were not lining up - the wrong powerpoint was being shown.  I went to the person and informed him that it was not the right one - the right one was on the flash drive.  I went back to teaching but noticed that still it was not right.  I stopped teaching again and went to check on the problem.  When I opened the flashdrive on his computer there was nothing there.  Hmm.

Then, as I came close to the end of the teaching for that night, I began to feel quite ill.  I hadn't felt great all day - quite tired and nauseated on and off.  But that isn't that unusual, given the givens, so I didn't think it was anything.  But suddenly, at 8:23 pm (I was supposed to stop teaching at 8:30 pm) I realized that I was going to faint.  I assumed that I was probably dehydrated (the elevation is high but because the weather is very cool you don't feel thirsty).  I had fainted once before years ago because of dehydration so I knew the symptoms.  But I had two more slides to get through.  And it had been such a rough night with the projectors and the slide issues!  So I decided to push through in order to not cause a scene, hoping I could finish and sit down without anyone noticing.

But pride goeth before the fall, they say.  I didn't make it.  I finished my slides and said that I needed to sit down before I passed out...and then proceeded to stumble toward the audience and fainted.  My translator caught me on my way down.  When I came to, I was on the ground with all the women around me shouting and praying and extremely worried.  I immediately assured them that I was okay - I just needed water.

But what Satan can mean for evil, God can use for good.  As they processed what had happened the whole evening, they all decided to pray against strongholds.  They prayed that evening and then woke early in the morning to cover the training in prayer.  When I made it to the venue (still feeling a bit shaky), they declared to me that all strongholds had been removed and the rest of the time would be well.  And it was. 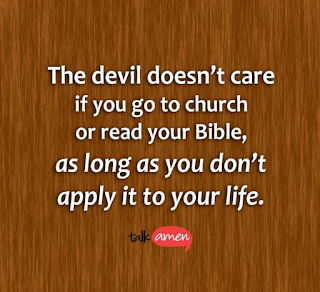 The fact that I had fainted however impacted the women in a way that caused them to listen to me more closely.  They kept saying I fainted because I had been working too hard and was exhausted - I kept telling them it was dehydration - but nevertheless...they believed that the message I had given to give to them was so important that I would press on despite exhaustion and so therefore it was critical that they get this message.  We had an excellent two days together and everything worked seamlessly.  The women interacted very well with the material and are very excited to start this work in their various regions.

Down but not out.

Keep pressing on (but if you feel like you are going to faint, sit down!!!).

We are beginning to reach some large numbers through large denominations, who can have a significant impact on the marketplace.  And my guess is that the devil doesn't like it.

Will you join us in prayer?

We are also in need of financial support.  Both Dr. Walker's support and my support are currently at a negative balance.  If you feel so led to give, please go www.disciplingmarketplaceleaders.org, click on donate, and follow the directions from there.  If you are not able to give, please pray for this as well, as God has been faithful to supply our needs since beginning this ministry!
Posted by The Reeds in the Wind at 11:41 PM No comments: