A Visit from a Hawk 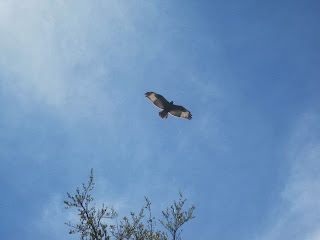 Two weeks ago, when I wrote about my silent retreat, I included a picture of a hawk with the caption that this hawk had circled over me a couple of times.

It felt significant to me at the time but it wasn't until I was talking with my dear Ghanaian sister, Fanny Atta-Peters that I began to consider it again.

This is what happened:  I was sitting on a bench at the top of bluff after having had a few hours of silence and listening.  I was preparing to leave the area and had moved away from the precipice to sit on a bench.  I was looking out at the country side of both Kenya and Uganda and was reflecting on the activity down there that was not visible to the naked eye from this distance.  I thought about how insignificant my life is - how vast this world is - how my life is such a blip in the history and future of this world.

Suddenly, from below, a hawk flew up and over me.  I remember spontaneously saying out-loud (I was by myself), "Wow.  I'd like to see that again."  As I watched, the hawk circled around broadly, came up behind me and hovered right over my head for probably ten seconds.  Then it flew off, circled around and stopped right over my head again, hovering for another ten seconds or so.  Then it flew off, circled around for one last time and hovered over me again.  Three times.  I remember thinking that this felt like God in some way, reminding me that while it is true my life is a blip and insignificant in the big picture, that my life matters to Him and He is aware of my life.  The three times felt like the Trinity - being visited by Father, Son, and Holy Spirit.  It felt very holy (even as I tried to catch a picture or two).

Fanny went on a silent retreat shortly after I came back from mine, and I had shared with her some of my reflections before she went.  We spoke the other day and shared how God had shown up in each of our retreats.  When Fanny heard about the hawk though, her response was, "Wow. Wow. Wow.  You have been blessed by God through this hawk."  She really felt that this had been sent by God. Fanny is a very close spiritual sister to me; we have known each other for almost four years now and I love how close she is to God and how important prayer is to her.  So I started wondering about this a bit more - and I wondered what symbolism folklore has about hawks.  After a quick Google search, I came up with the following quotes:

“The hawk is a messenger bird. Usually when we see a hawk it means to pay attention because a message is coming to you. Hawks represent clear sightedness, being observant, our far memory and guardianship. They also bring courage, wisdom, illumination, creativity and truth. Hawks give us the ability to see the larger picture in life. They can help you to overcome problems and make wise use of opportunities. How does this all happen? Each animal carries what we call ‘medicine’. What I have written above is the hawks medicine. When the same animal keeps coming to you in real life or in a dream, it is bringing it’s medicine to you. You will be brought a message soon, a good one, to let you know you are on the right path. And whatever problems you are wrestling with, you will solve because hawks medicine has been given to you. I know this because I am a traditional Shawnee (American Indian) and I’ve learned these things are true. 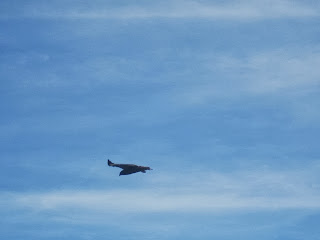 Another person said in response to a hovering hawk,
"Blessings, blessings and more blessings. You have been blessed. Give thanks. . . . Hawk is a messenger of the Creator/God. The Hawk wants you to be aware the Creator is speaking to you. Take notice. Only you know what the message is. . . in fact, you already know (even if you don’t realize it yet). God is sending you a message. . . but it is for you. Be aware; take notice. (People often think this is a negative, as if “awareness” is negative; it simply means not to be oblivious to your surroundings, dreams, etc). Personally, I have always given thanks to the hawk whenever  I see him/her."

Not sure about this but I do find it interesting.  God has always shown up in one way or another during a silent retreat, and I love His intimate love that is tangible and specific, while also knowing His corporate and general love on the world!