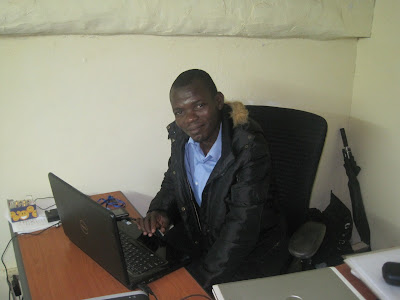 As you know, I have been spending my time in Liberia for the last week or so. While this blog is being posted, I'm actually in Cote d'Ivoire without Internet access, so I trust this is being posted on time.

I have realized while being here that I have begun to forget some of the stresses that comes with living in a post-conflict environment with extremely high poverty and unemployment. The stress of living in Ghana is higher than in Michigan but lower than Liberia. A couple of days into my visit, I began to make some notes of things that Allen Gweh, the National Director for LEAD, was sharing with me as a matter of course or that I happened to observe just by being here. These things would have been significant stressors for me (and I think for many people) but Allen worked through them with ease and grace. I don't believe I would have heard of these issues had I not been here to observe them or be in casual conversation. I asked Allen if I could share a little about them and he said that would be okay. I hope by sharing this that you will get to know Allen better and can pray for him, for all the staff at LEAD, and the work here in a new way. Here is a picture of Allen, wearing his winter coat because it is a very cool 75 degrees Fahrenheit and has been raining for several days. The following picture is a more typical picture of Allen as he holds a staff meeting with about twelve staff persons and seeks to make things very clear to them. 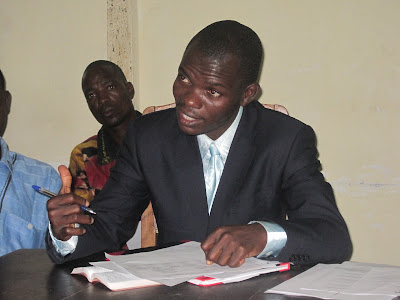 The first thing happened on Friday morning, as we prepared for our trip to Grand Cape Mount County. I overheard Allen on a phone call, talking about notifying the police and asking the caller to get back to him soon. After asking him what was going on, he shared that the LEAD motorcycle of the Program Manager in Nimba County had been stolen that morning. Pressing him for a few more details, he shared that rogues had entered the home of Mr. Daniel Nya-Konah during the night; they locked him in his room and emptied his house of items, including the motorbike. When he was finally able to free himself and locate a phone he could borrow (as his was stolen), he notified Allen as well as the police to be on the look-out for this bike. I immediately assumed that this bike would never be seen again (at which point Allen would have informed me of the incident). About three hours later, Allen received another call in which Daniel informed him that the bike had been located en route to Guinea and due to the police trying to stop him (police have no arms or vehicles to pursue, so that is not easy to do), the rogue ended up deciding it wasn't worth it and ditched the motorcycle in a hole. A passerby noticed the bike in the hole and decided to turn it in to the police. Very surprising ending.

The second stressor occurred some time ago, as LEAD was establishing its new office in Grand Cape Mount County. There was a microfinance institution (MFI) located in the same town who had been there for some time. [There are a number of differences between LEAD and MFIs - MFIs mostly give very small loans at high interest rates without other supports like training, mentoring, or advocacy, to name a couple.] This MFI (I won't mention the name even though I would really like to) decided to post the picture of LEAD's new program manager for this county, Harrison Dorbor, in their office, claiming that he owed money to them for a loan he took and hadn't repaid. He had never taken a loan from them nor had any interaction with this MFI before. This was done to "spoil his name" (as they say here) so that people wouldn't trust him or LEAD. It didn't take long for Harrison to hear about this, at which time he went to this MFI's office, removed the paper with his picture, and promptly filed a lawsuit against them. Since this involved Harrison and not LEAD, Allen did not need to get involved. However, this MFI receives a good amount of funding from large places, and before long, Allen was contacted by Central Bank and asked to settle this matter between these two organizations.

The third stressor occurred shortly after my last visit in February, when it was decided that it was time to let a certain staff person go who had not been performing well. This staff person did not take this decision very well, which is understandable as jobs are not easy to come by in Liberia. He ended up bringing a case of wrongful dismissal to the Ministry of Labor and Allen had to defend his case. Thankfully, Allen keeps great records on all staff and observes protocol in terms of warnings and evaluations, so this blew over shortly. Additionally, Allen is in his last semester of law school and he actually likes to argue cases!

The last one I'll share relates to politicians seeking out LEAD's constituency. As you may know, next year is an election year in Liberia, and those running are seeking votes wherever they can. Some politicians have realized LEAD's numbers are growing in their county and are beginning to pressure Allen to have LEAD endorse them. LEAD is not in the business of politics but this is a stress that could come with money attached in order to buy votes, so there is temptation wrapped up with it as well.

And so it goes. I was very pleased to give Allen his evaluation while I was here. He has been the National Director for 1.5 years and I think he is doing a great job. He is a natural leader, fair in his decisions, clear minded, a quick thinker, and has the gift of being able to juggle many things at once. As he mentioned in our evaluation meeting, this past year was very challenging for him but very encouraging as well. 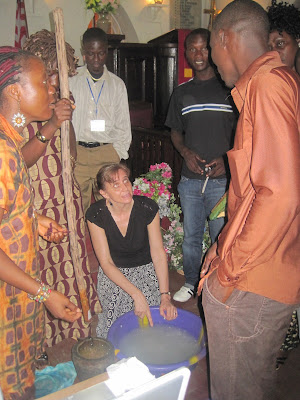 On Monday we did a Training of Trainers for the LEAD staff. To break up the day, we worked on achieving another goal of bringing new business ideas to Liberia. I gave a demonstration on how to make recycled paper with very simple materials and low overhead. I learned this in Ghana from the Art teacher at Hannah and Noah's school. 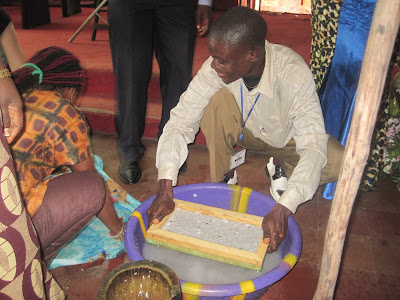 Here the new Education Coordinator for Margibi County tries his hand at making the recycled paper. 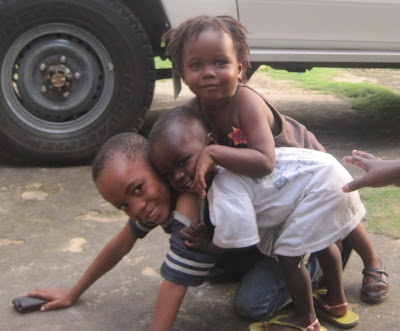 I spent some time in Thinkers Village. Here is a picture of small Renita and her friends, having a good time, laughing and playing. 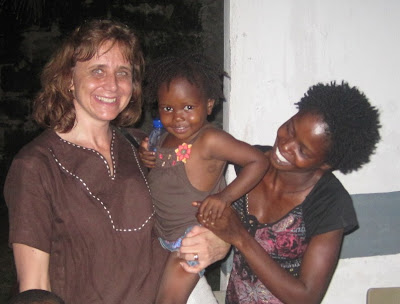 Small Renita and Patience with big Renita. She will be three this fall. Hard to believe she has gotten so big! But she looks great and was not too shy with me this time.
Posted by The Reeds in the Wind at 3:02 AM 2 comments: