On December 8, I wrote a blog about Pastor Moffat Weru and the fire he experienced in his business (click here to read the story).  A number of you replied with sympathy and prayers.  A few of you offered gifts or loans to help rebuild his business.  If you remember, Pastor Moffat had just graduated as a Marketplace Minister and was running a motorcycle parts shop when the shop two doors down from him caught fire.  The fire was spreading and in an effort to "help," community members broke down the doors of Pastor Moffat's shop and carried his goods out to "save them."  Unfortunately, most of those goods were then looted and the fire did not reach the interior of his shop.  Pastor Moffat had insurance but the insurance company denied his claim as the fire didn't reach his shop.  When he argued that they broke in and stole, the insurance company stated that because it was such a large crowd it was a political looting and therefore his insurance didn't cover that.  When Pastor Moffat pursued the security company, who also carries insurance on properties that they protect, they said they weren't responsible because the security guard was doing everything he could to stop the fire. 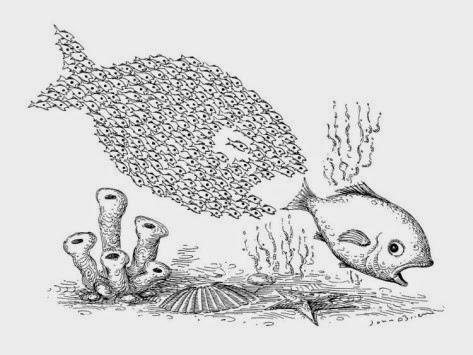 Shaking our heads over the injustice of it, we rallied to figure out how we could help Pastor Moffat.  But for just a few days we forgot that we had power that goes beyond that.  Power in the name of advocacy.

Of the four activities that we do to help businesses develop, three are based on internal issues:  training, mentoring, and access to capital.  But anyone who has done a SWOT analysis, knows that there are both internal and external issues that face businesses (or churches or organizations), with the external issues taking the form of opportunities or threats.  That is where Advocacy comes in, the fourth activity that we do with businesses.  Often times businesses feel very much like the little fishes in these pictures, without much hope to come against the big system and make any changes.  Kenya ranks at 129/185 countries for the ease of doing business, according to the World Bank annual report (Doing Business 2014).  There are many threats to doing business, especially as it relates to the strength of the legal systems in a country as well as the cost and efficiency to business processes.

However, what advocacy does is help these "small fishes" figure out how to organize themselves to look like a big fish and exert a bit more power on the system.  I was first exposed to this idea when I worked with an organization called the Michigan Organizing Project and carried it over to my work with Partners Worldwide.  This visual image resonates with small business owners who often feel overwhelmed by the system and powerless as to their role in it.  The businesses in Kenya are doing a great job of seeing the potential of this and they have organized themselves into three centers, with three different cooperatives based on their geographical area.  Within these cooperatives, they are forming a number of subcooperatives as it relates to agriculture (both crops and animals), retail, services, manufacturing, and energy production.  Together, they have decided that the Discipling Marketplace Leaders office needs to form a National Forum under which they can all come together to address national issues.  We have formed a committee for this and are well on our way with these plans.

So now, back to the story with Pastor Moffat.  On the Friday before I left Kenya, we were to have an Advocacy committee meeting.  As I waited for people to arrive, the idea occurred to me (or can I say the Holy Spirit planted an idea?) that we should get involved with Pastor Moffat’s situation.  Here was a man who paid insurance and had a security firm who is insured for looting and both had denied him.  There was injustice here.  A secondary motivation for me was the knowledge that when it is difficult for people to believe in working together, it is necessary to have a “win” to help business members recognize the importance of standing together and uniting.

During the meeting I brought up the idea that we should pursue this case with Discipling Marketplace Leaders, have a meeting with Pastor Moffat and the insurance company and security company, and remind them that we are advocating for our businesses to take insurance but if they won’t pay, what is the point?  We also talked about picketing the place with our businesses if we needed to.

I left Kitale on the Monday following this meeting and asked Pastor Alfred Kibairu to take the lead on this.  Kibairu met with Moffat, who had already admitted defeat and didn’t want to go back to them.  But Kibairu persuaded him to set up a meeting, and Kibairu accompanied him.  And it’s amazing how quickly a business can see sense when faced with a bit of pressure, backed by the power of numbers!   After a couple of meetings, the security firm closed shop and fled town. But the insurance agency agreed to pay!  Pastor Moffat had to round up his receipts and turn them in.  He lost about 850,000 KSH worth of goods (about $10,000 US) but was only insured for 650,000 KSH ($7600 US) and that is what he will receive.  He is thrilled!  Plus it’s a good lesson for him to increase his insurance and keep it for next time, this time including a policy for looting!

We will now invite this insurance agency to speak to our businesses about the importance of insurance and (hopefully) offer them good deals, continuing to develop a relationship with DML that will be good all the way around!  We will tell this story to our businesses and encourage them to work together!

This week we will be going through loan applications from all three centers, totaling over $100,000 US in requests.  We have only $40,000 to loan out, given by several investors in the US who have loaned us the money for these businesses, so we have some tough decisions to make.  Pastor Moffat will be one of the ones receiving a loan, but please pray with us for discernment and wisdom for the rest!
Posted by The Reeds in the Wind at 10:24 AM No comments: