I read this post from the BBC the other day and thought that I couldn't do better than it in describing some of the conditions in Liberia.  This article was written by John Humphrys of the BBC and can be found directly by going here.  LEAD has an office in Bong County and so we know the roads and these billboards well. This article reminds me of the importance of our work in business development, creating jobs, and poverty alleviation.

Reading Liberia Through Its Colourful Billboards

Like many African countries, Liberia exudes potential but has little to show for it. As BBC Radio 4's Today's programme begins a year-long focus on the challenges facing just one part of the country - Bong County - presenter John Humphrys considers what the region's many distinctive billboards tell us about its ambitions.


It takes a long time to get anywhere in Liberia. There are only a couple of narrow tarmac roads and the further you get from the capital, Monrovia, the more dangerous they become - pot-holes like jagged craters so steep and deep you'd never survive hitting them at speed. You have to do a lot of very violent swerving.

But there's one good thing about travelling by car (there's virtually no public transport) which is that you learn an awful lot about the country: its past, present and what they hope will be its future.

Relatively few people read the newspapers. The rest have huge public billboards at the side of the roads that tell them what the government wants them to know, how it wants them to behave.

Simplistic propaganda it may be, but if these messages do get across, the country will be a better place.  Let me take you on a drive through Bong County, starting in the state capital, Gbarnga, and introduce you to some of the billboards and their messages.

Here, as you leave the town, is my favourite: "Share ideas. Don't miss out. Go to school." What a lovely idea - a government exhorting its people to share ideas.

But going to school is easier said than done. It's not just the young children who need to learn to read and write and do their sums. A generation of men and women had their young lives stolen from them by the civil war that tore this country apart over a bloody 14 years. 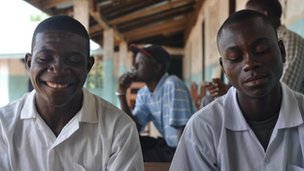 I talked to one young man in a primary school. He is now 18 but he is in the same class as 11-year-olds. His parents were butchered in the war. Yet he is determined to get an education. He wants to be a doctor.

Here's another billboard: "The police is your friend." Well, that rather depends on who you are.  This billboard is at one of the many checkpoints on the main roads where drivers are routinely stopped. We're close to the border with Guinea, and Liberians worry about what they call aliens and drug dealers coming in. They found someone with some drugs in his car here the other day and beat him to death.

And here's another on the same theme. "Make Liberia gun free. No more guns… but the ballot". Again, it's hard to avoid a slight sense of wishful thinking.

Although people in a rural area like this are incredibly friendly to strangers like us, you sense that violence is never far below the surface. So many of the young men you meet have hard eyes. Did they fight in the civil war? Probably. They had no choice.

Health is a big subject for the billboards: "No woman should die while giving life because you know what to do". Many do die in childbirth. Another one for pregnant women: "Every full belly should be checked for HIV". Aids is another big killer. 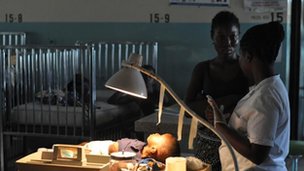 And here's another billboard a little further on: "Germs are the killers of human beings. You cannot see them". Now that's a message that has yet to be learned if the mortality figures are to be believed - and not just in this country.
It's estimated that half the hospital beds in sub-Saharan Africa are filled with people suffering the consequences of bad sanitation. In Liberia, six out of seven people use the bush as their toilet. There is no running water and no sanitation.

In Gbarnga you can see a big water tower but it hasn't worked for years because it was badly damaged in the war. Most people either have to pump water by hand from wells and bore-holes if they live in villages in the bush, or they get it from creeks and rivers and streams. And they are horribly contaminated by fecal matter. Almost as many people here die from diarrhea as they do from the biggest killer, malaria.

The health service is in a wretched state. The county of Bong has a population of 350,000 people and only four doctors and four ambulances, and there is only one general hospital. It's gloomy and rather smelly and has virtually no equipment. There are no defibrillators or ventilators.

In the waiting area there is a mammogram machine. It's been there a year and has never been used. No-one knows how to use it. It's still in its wrapping. It was a gift from a misguided charity.

As I walked into an operating theatre a large rat scuttled across the floor in front of me. The doctor who was showing me around did not flinch. Yes, he said, we have a problem with rats.

As we leave Gbarnga we approach a bridge over the river. A big gang of boys and young men are working beneath this bridge. They're here all day, several of them trying to get you to leave the road and drive down to the river bank so that their colleagues can wash your car in the river. They charge very little and they earn about a pound a day. It's better than nothing.

The truth is, it's very hard to see how the mass of people make a living in this country. Unemployment is hard to estimate. I was told by many people that it's probably more than 90%. Looking at the number of young men wandering the streets with nothing to do, that's not hard to believe.  I've never seen so many little ramshackle stores and tiny shops all selling pretty much the same stuff for a few pence.

Some of them will stay open as we drive into the night - mostly using lanterns or torches because there is no national grid, no mains electricity. Some of the bars and restaurants have their own generators so, as you look out of the car's windows, you see little patches of light here and there in the villages and the bush.

But even as you drive closer to the capital you get the sense of a country that in some ways slipped back into the dark ages. Civil war does that.

Yet it's also a country that is now clearly - visibly - capable of diagnosing its problems. It knows what needs to be done and it is using the messages on the billboards to proclaim its intentions and exhort its people to move on.
Posted by The Reeds in the Wind at 2:49 AM No comments: