I don't know if you have heard of the Law of Three Generations for Christians.  I am told this comes from Bruce Wilkinson who also describes this as the "Powerful Principle of Three Chairs."

Imagine three chairs side by side.  Each chair represents a different person and their faith, with three different levels of commitment toward God.  Every person reading this blog is sitting in one of those chairs.  You can decide where you sit but you cannot decide the consequences of that decision. 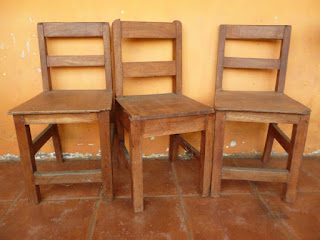 The first chair is called "commitment." This person has a whole heart for God and a personal relationship with Jesus.  This person is deeply committed to Jesus in all they do.  An example of a person sitting in this first chair would be David.

The second chair is called "compromise." This person has accepted Christ but hasn't decided how much or little to follow Him.  They agree with the beliefs of the first chair and appears to follow the "Christian lifestyle" but there is inconsistency and instability.  Children who grow up in a Christian home tend to sit in this second chair.  It's also easy for a Christian to slide from the first chair to the second chair.  An example of this would be David's son, Solomon.

The third chair is called "conflict."  This person has not responded personally to God and may be confused by their spiritual condition.  If he/she has grown up in a Christian home, they may look and act like those in the other chairs, but there is a gulf between this person and God.  A person who grows up in the home of the second chair tends to sit in the third chair.  They saw Christianity in name only and therefore reject it when they are older.  An example of this would be Solomon's son, Rehoboam.

Here is another example of the three chairs, in three generations, from Joshua and Judges:

And if it seems evil to you to serve the Lord, choose for yourselves this day whom you will serve… But as for me and my house, we will serve the Lord. So the people answered and said: Far be it from us that we should forsake the Lord to serve other gods… So the people served the Lord all the days of Joshua, and all the days of the elders who outlived Joshua, who had seen all the great works of the Lord which He had done for Israel…. When all that generation had been gathered to their fathers, another generation arose after them who did not know the Lord nor the work which He had done for Israel. (Judges 24:15-16; Judges 2:7, 10)

I've been thinking about this a lot of late, especially because of conversations with Europeans who appear to be in a post-Christian era, conversations in the United States who seem to be heading toward a post-Christian era, and conversations with Africans who seem to still be in-between the first and second generation.   Our DML bible study on Nehemiah reminds us of the pattern of the generational forgetting of God when things go well and then remembering when crisis happens.

To know God and to know about God are very different.

I continue to pray that we, as the Global Church, pursue making disciples who experience no sacred/secular divide which will allow us to see God in every place and every space, and not relegate Him only to the church building and Sunday worship.  That is not the full answer, but I do think it is an important part of it.