Doing Our Homework for Ghana 101 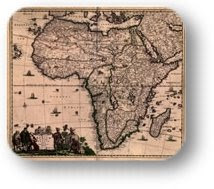 Ghana History, Part One: The Original Ghana
.
As the Reeds get ready for their important move, it would be irresponsible of us to do so ignorantly. One of the things that make infamous caricature "the Ugly American" sometimes all too accurate is our ignorance and insensitivity to places we visit or go to live. If we do a bit of homework, our hosts are usually respond with surprise and appreciation that we took the time to learn about them. Beyond that, the more we know about a place, the more we can understand and value the rich heritage underpinning the way others do things. So let's start our study of Ghana by looking at some history.
.
First, geographical Ghana as it exists today is only about 50 years old. The former "Gold Coast" became an independent nation in 1957, the first sub-Saharan African nation to do so as colonial influence waned. Dr. Kwame Nkrumah, the nation's first Prime Minister, selected the name Ghana, after the ancient empire of the same name.
However, regardless of its name, the ancient Ghana is not geographically, ethnically, or in any other way, related to modern Ghana. It existed about four hundred miles north west of modern Ghana. Ancient Ghana encompassed what is now modern Northern Senegal and Southern Mauritania. The following information comes from the BBC site titled The Story of Africa. If you would like to conduct more research, link to the address at the bottom of this post. Or type "Ghana history" into a search engine like Yahoo or Google.
Origins
Nobody is sure when Ghana came into being. But some time at the beginning of the first millennium AD, it is thought that a number of clans of the Soninke people, (in modern Senegal) came together under a leader with semi-divine status, called Dinga Cisse.
There are different accounts of who he was, but all reports emphasise that he was an outsider who came from afar. It is likely that this federation of Soninke was formed possibly in response to the attacks of nomadic raiders, who were in turn, suffering from drought, and seeking new territory. Further west was the state of Takrur in the Senegal valley. It was linked to the north via a coastal route leading to Morocco via Sjilmasa. What is clear, is that the Empire derived power and wealth from gold. And the introduction of the camel in the Trans-Saharan trade boosted the amount of goods that could be transported.
Most of our knowledge of Ghana comes from Arab writers. Al-Hamdani, for example, describes Ghana as having the richest gold mines on earth. These were situated at Bambuk, on the upper Senegal River. The Soninke also sold slaves, salt and copper, in exchange for textiles, beads and finished goods. The capital of Kumbi Saleh became the focus of all trade, with a systematic form of taxation. Later Audaghust was another commercial centre.
Trade
The route taken by traders of the Maghreb to Ghana would have started in North Africa in Tahert, sweeping down through Sijilimasa in Southern Morocco. From there the trail went south and inland, roughly running parallel with the coast. Then it curved round to the south east through Awdaghust, finally ending up in Kumbi Saleh - the royal town of Ghana.
Islam
Inevitably traders brought Islam with them. Initially, the Islamic community at Kumbi Saleh remained a separate community some distance away from the king's palace. It had its own mosques and schools. But, the king retained his traditional beliefs. He drew on the book-keeping and literary skills of Muslim scholars to help run the administration of the territory. The state of Takrur to the west had already adopted Islam as its official religion and evolved ever closer trading ties with North Africa.
Decline
There were a number of reasons for Ghana's decline. The King lost his trading monopoly. At the same time drought was beginning to have a long term effect on the land and its ability to sustain cattle and cultivation. But the Empire of Ghana was also under pressure from outside forces.
There is an Arab tradition that the Almoravid Muslims came down from the North and invaded Ghana. Another interpretation is that this Almoravid influence was gradual and did not involve any sort of military take-over.
In the 11th and 12th century new gold fields began to be mined at Bure (modern Guinea) out of the commercial reach of Ghana and new trade routes were opening up further east. Ghana became the target of attacks by the Sosso ruler Sumanguru. Out of this conflict, the Malinke emerged in 1235 under a new dynamic ruler, Sundiata Keita. Soon Ghana was totally eclipsed by the Mali Empire of Sundiata. 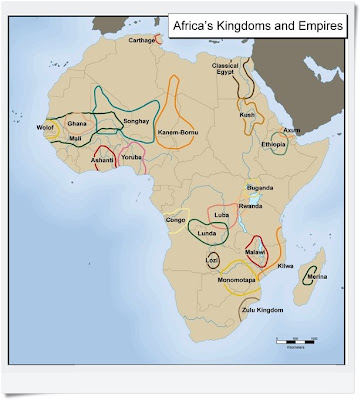 There were many great African kingdoms before and during the European exploration period. 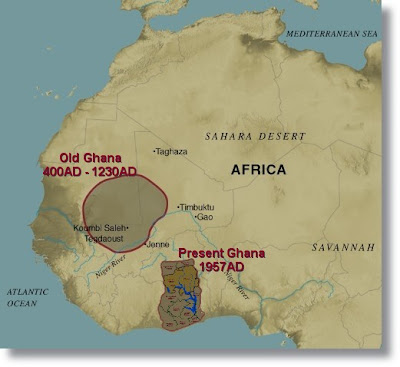 Ghana, then and now. 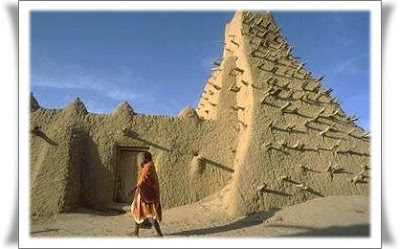 One of the few old Ghanaian ruins still standing.

good points and the details are more specific than elsewhere, thanks.